High debt levels have some Canadians in a tight bind: Insolvency expert

A decade of easy money has left the world with a record US$250 trillion of government, corporate and household debt. That’s almost three times global economic output and equates to about US$32,500 for every man, woman and child on earth.

Much of that legacy stems from policy makers’ deliberate efforts to use borrowing to keep the global economy afloat in the wake of the financial crisis. Rock bottom interest rates in the years since has kept the burden manageable for most, allowing the debt mountain to keep growing.

Now, as policy makers grapple with the slowest growth since that era, a suite of options on how to revive their economies share a common denominator: yet more debt. From Green New Deals to Modern Monetary Theory, proponents of deficit spending argue central banks are exhausted and that massive fiscal spending is needed to yank companies and households out of their funk.

Fiscal hawks argue such proposals will merely sow the seeds for more trouble. But the needle seems to be shifting on how much debt an economy can safely carry.

More than a decade after the financial crisis, the amount of combined global government, corporate and household debt has reached US$250 trillion.

More than a decade after the financial crisis, the amount of combined global government, corporate and household debt has reached $250 trillion.

Central bankers and policy makers from European Central Bank President Christine Lagarde to the International Monetary Fund have been urging governments to do more, arguing it’s a good time to borrow for projects that will reap economic dividends.

Rising expectations of fiscal stimulus measures across the globe have contributed to a pick-up in bond yields, spurred by signs of a bottoming in the world’s economic slowdown. Ten-year Treasury yields climbed back above 1.80 per cent Monday, while their Japanese counterparts edged up closer to zero.

A constraint for policy makers, though, is the legacy of past spending as pockets of credit stress litter the globe.

At the sovereign level, Argentina’s newly elected government has promised to renegotiate a record US$56 billion credit line with the IMF, stoking memories of the nation’s economic collapse and debt default in 2001. Turkey, South Africa and others have also had scares. 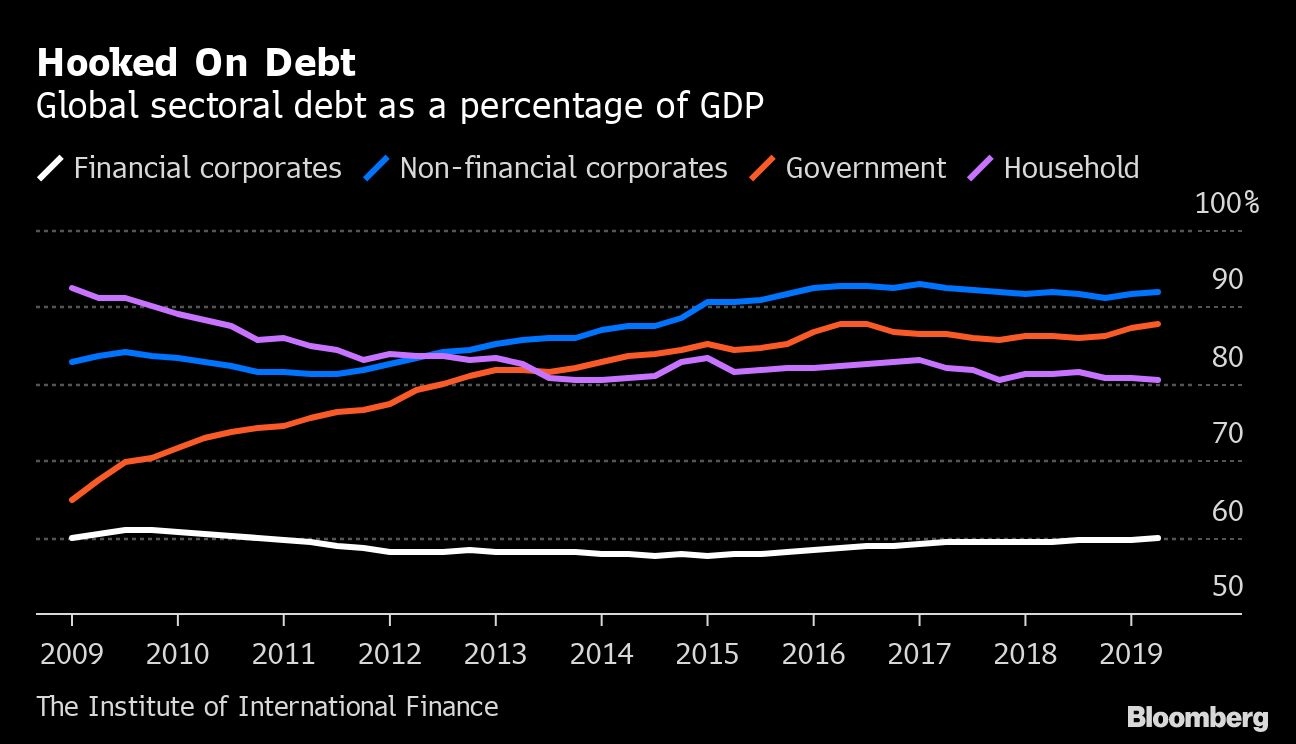 As for corporate debt, American companies alone account for around 70 per cent of this year’s total corporate defaults even amid a record economic expansion. And in China, companies defaulting in the onshore market are likely to hit a record next year, according to S&P Global Ratings.

So called zombie companies -- firms that are unable to cover debt servicing costs from operating profits over an extended period and have muted growth prospects -- have risen to around six per cent of non-financial listed shares in advanced economies, a multi-decade high, according to the Bank for International Settlements. That hurts both healthier competitors and productivity.

As for households, Australia and South Korea rank among the most indebted.

The debt drag is hanging over the next generation of workers too. In the U.S., students now owe US$1.5 trillion and are struggling to pay it off.

Even if debt is cheap, it can be tough to escape once the load gets too heavy. While solid economic growth is the easiest way out, that isn’t always forthcoming. Instead, policy makers have to navigate balances and trade offs between austerity, financial repression where savers subsidize borrowers, or default and debt forgiveness.

“The best is to grow out of it gradually and consistently, and it is the solution to many but not all episodes of current indebtedness,” said Mohamed El-Erian, chief economic adviser to Allianz SE.

Policy makers are plowing on in the hope of such an outcome.

To shore up the U.S. recovery, the Federal Reserve lowered interest rates three times this year even as a tax cut funded fiscal stimulus sends the nation’s deficit toward 5 per cent of GDP. Japan is mulling fresh spending while monetary policy remains ultra easy. And in what’s described as Britain’s most consequential election in decades, both major parties have promised a return to public spending levels last seen in the 1970s.

China is holding the line for now as it tries to keep a lid on debt, with a drip feed of liquidity injections rather than all out monetary easing. On the fiscal front, it has cut taxes and brought forward bond sale quotas, rather than resort to the spending binges seen in past cycles.

“When a slump does come, as surely it will, monetary policy won’t have all the answers -- fiscal policy will contribute, but with limitations.”

As global investors get accustomed to a world deep in the red, they have repriced risk -- which some argue is only inflating a bubble. Around $12 trillion of bonds have negative yields.

“With central bank rates at their lowest levels and U.S. Treasuries at their richest valuations in 100 years, we appear to be close to bubble territory, but we don’t know how or when this bubble will burst.”

The IMF in October said lower yields are spurring investors such as insurance companies and pension funds “to invest in riskier and less liquid securities,” as they seek higher returns.

“Debt is not a problem as long as it is sustainable,“ said Alicia Garcia Herrero, chief Asia-Pacific economist at Natixis SA in Hong Kong, who previously worked for the European Central Bank and Bank of Spain. “The issue is whether the massive generation of debt since the global financial crisis is going to turn out to be profitable.”