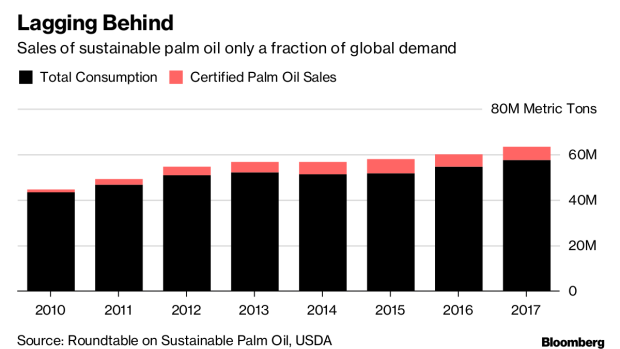 Production of sustainable palm oil has jumped to a record 13.6 million metric tons a year, about 20 percent of global output, according to the industry body that certifies the commodity. But only half of that is sold as sustainable oil. That’s because it’s more expensive to produce and hardly anyone is willing to pay a premium, says Sime Darby Plantation Bhd., the top planter by acreage.

“Buyers don’t want to pay for it,” Simon Lord, chief sustainability officer at Sime Darby, said from Kuala Lumpur. “There is increasing resentment among growers that the other actors in the supply chain are not stepping up.”

Palm oil is increasingly controversial, particularly in Western countries, as images of deforestation and dying orangutans turn popular opinion against the ubiquitous commodity. But producers are hitting back, saying consumers aren’t willing to put their money where their mouths are.

The certified oil typically sells at a premium of about $30 a ton to the non-certified kind, though this can vary significantly depending on purchase volumes and negotiations between buyers and sellers. To gain certification, it costs producers a minimum of $8 to $12 a ton, and there are other additional expenses like audit fees, logistics and environmental assessments, says Sime Darby, the biggest producer of certified, sustainable palm oil (CSPO).

Sime Darby says it can only sell about 50 percent of its certified variety at a premium, with the rest being offloaded into a pool of non-certified oil without achieving any added value. Companies are having to sell their CSPO below cost, and would rather do that than stockpile it, says Oscar Tjakra, a senior analyst for grains and oilseeds at Rabobank International.

“Some companies are already making a loss due to the high cost of production and financing, in addition to the extra costs for sustainable certification,” said Tjakra. “Considering the oversupply situation in the market, companies still have to sell their palm oil as storage tanks are full.”

So who isn’t buying? According to the World Wildlife Fund, demand for CSPO in major consumers India, China, Malaysia and Indonesia remains low. Some companies in Europe also haven’t adopted “ambitious, time-bound commitments to procuring 100 percent CSPO,” though uptake from the EU is the highest, WWF’s global palm oil lead Elizabeth Clarke said.

Mondelez International Inc., maker of Cadbury chocolates, said it’s working with suppliers to ensure its palm is fully traceable, and at the end of 2017 about 96 percent of what it uses was traceable to the mill. Nestle SA, where about half the tropical oil it sourced in 2017 was traceable to the plantation, says buying the certified variety is one way of pushing the industry toward a sustainable future and it aims to use 100 percent RSPO certified oil by 2023.

Still, buyers do face challenges procuring the oil “in specific geographies due to the lack of proximity to available CSPO,” Nestle said.

“Consumers today want to know what is in their food, where the ingredients come from and how it is made,” Nestle told Bloomberg by email. “In many cases, companies do pay higher prices for responsibly produced palm oil.”

The controversy surrounding palm has been simmering for decades, but the furor has recently intensified, with a U.K. supermarket chain’s viral anti-palm ad and environmental groups naming and shaming buyers of the unsustainable oil. The biggest blow to the industry may come from one of the top purchasers -- the European Union -- which is clamping down on unsustainable supply.

The body that certifies the oil is also disconcerted by the muted response from consumers. Set up in 2004, the Roundtable on Sustainable Palm Oil is responsible for assessing the product, with the costs depending on plantation size, how far auditors have to travel and whether it’s a high risk area.

Market commitment and uptake of CSPO will be the defining factor when it comes to spurring adoption of sustainability standards, the RSPO said. While retailer members are almost all buying certified oil, processors, traders and consumer goods manufacturers have significant room for improvement, it said.

For Greenpeace, responsible production does cost more and consumer goods companies should pay for it to encourage change in the industry.

“The solution is for big brands to only buy palm oil from responsible growers that protect rainforests,” Diana Ruiz, a senior palm oil campaigner for Greenpeace in the U.S. “And it is available.”

To contact the reporter on this story: Anuradha Raghu in Kuala Lumpur at araghu3@bloomberg.net