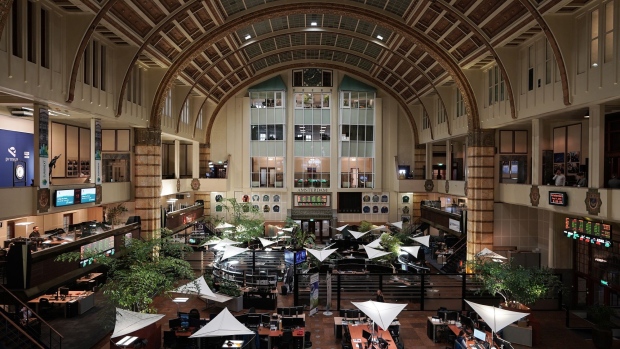 Financial traders monitor data on computer screens on the trading floor inside the Amsterdam Stock Exchange, operated by Euronext NV, ahead of the trading debut of the new Prosus NV unit of Naspers Ltd., in Amsterdam, Netherlands, on Wednesday, Sept. 11, 2019. Naspers will retain 73% of the new company, which will house everything from a 31% stake in Chinese online giant Tencent to food delivery and advertising firms from the U.S. to India and Brazil. Photographer: Jasper Juinen/Bloomberg , Bloomberg

For two years in a row, Europe’s largest stock-market listings have taken place in Amsterdam, which has beguiled companies with a deep pool of international investors and corporate governance norms that tilt in favor of management teams.

The coffee giant’s float comes eight months after South Africa’s Naspers Ltd. listed its Prosus NV internet unit on the world’s oldest stock exchange with a market value that well exceeded $100 billion. Europe’s hottest deal of 2018 was payments company Adyen NV’s $1.1 billion IPO in the Dutch capital. It is the Amsterdam Exchange Index’s best performer this year, up 58% compared with a 12% decline for the Dutch benchmark.

“Amsterdam has a deep and broad investor base that’s very international in share,” said Rients Abma, executive director at Eumedion, a Dutch corporate governance forum for institutional investors. On average, 85% to 90% of blue-chip Dutch stocks are owned by non-Dutch institutions, according to Abma.

The option to establish a “Stichting” -- a legal entity that shrouds the company and is essentially a takeover defense in the face of a hostile bid or shareholder activism -- also makes Amsterdam an attractive home for firms, Abma said.

Generic-drug maker Mylan NV, which is run from Canonsburg, Pennsylvania, but incorporated in the Netherlands, used the defense in fighting an unsolicited offer from Teva Pharmaceutical Industries Ltd. in 2015.

The Netherlands is a popular place for international and regional head offices. Companies including Italian luxury carmaker Ferrari NV and French telecommunications operator Altice Europe NV are registered in the country.

“Definitely not all companies registered in the Netherlands also list here, but some do as it seems a bit more logical,” said Van Zeijl.

JDE Peet’s has deeper ties to Netherlands than just a registration. The company is headquartered in Amsterdam and the country generated 10% of its revenue last year. Most of all, the JDE in its name stands for Jacobs Douwe Egberts, borne out of a 2014 merger of Mondelez International Inc.’s caffeine business and Dutch coffee stalwart Douwe Egberts, first established in 1753.

Moreover, the brand listed in Amsterdam with great fanfare in 2012, under the name D.E Master Blenders 1753 NV. Just over a year later, it was taken private again by JAB after findings of accounting irregularities at a subsidiary in Brazil led to a 56% decline in profit.