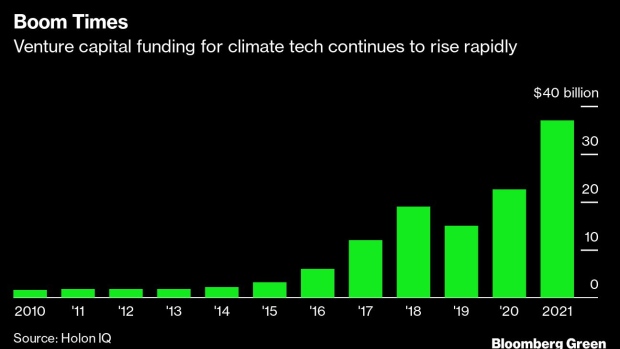 Is a global economic recession imminent? That question has been giving many people watching markets sleepless nights. One group, however, seems less worried: climate tech investors.

Typically recessions see investors fleeing to safer assets like government bonds and mature companies. And they start investing less in or even divesting from riskier assets, such as venture capital, which bets on early-stage companies fully expecting many to fail and hoping that some succeed wildly.

Things are different now, according to Mark Cupta, managing director of Prelude Ventures. “2022 is on pace to eclipse every other year in venture-capital fundraising” with the trend “amplified” for climate investing, he says. Every climate startup that Prelude has recently backed has received highly competitive investor bids in funding rounds. “There’s still a very robust, potentially recession-proof, segment within climate tech for people who are trying to solve really hard problems,” he says.

Climate tech covers a huge swathe of industries from electric cars and carbon-free cement to green hydrogen and technologies for removing carbon dioxide from the air. Investors see that funding these technologies will help avoid a hotter planet, which would have worse, long-lasting economic impacts than the short-term recession we might be about to face.

Investors understand that “we have fundamental risks that, if we don’t tackle with real deep science and engineering, that will take us a full step forward, or two steps forward, we’re in trouble,” says Katie Rae, chief executive officer of The Engine, a Boston-based firm that invests in climate startups.

The Engine was launched after research published by the Massachusetts Institute of Technology showed investment in companies that build physical products was going down for the past 30 years. MIT seeded The Engine, which has now invested more than $200 million and includes other investors, such as university endowments and offices that manage the funds of rich families.

Has it succeeded? Rae says that The Engine’s portfolio companies have raised more than $3.7 billion since 2016. “It’s not just us believing our schtick,” she says.

To be sure, the climate tech boom requires more than investment dollars. The bottleneck for many of the startups I visited last month in Seattle, Boston and around San Francisco wasn’t money, but people. “We’ve underinvested and de-incentivized kids to follow STEM, material science and chemistry programs for the last 20 to 30 years,” says Chamath Palihapitiya, founder of Social Capital, who has made big investments in rooftop-solar financing and battery materials companies. “It’s so hard to find these folks.”

Palihapitiya says that some of the largest companies in the traditional energy sector have so many trade secrets that it’s hard to be able to replicate on the same scale in the climate tech space what they do without deploying an army of PhDs. If you can find people with the science qualifications, say in the oil industry, retraining them to a new subject expertise in wind power, for example, is not easy either. “You can’t go and take an online course that will all of a sudden give you a certificate to work at these companies,” he says.

Meanwhile, there’s now more money than ever being unlocked for cutting-edge solutions to global warming. The new US climate bill, which will provide $370 billion in climate spending, has plenty of incentives for solar and wind power, but also for nascent technologies, such as direct air capture and long-duration energy storage for the grid. “That makes it economic for [these startups] to manufacture and sell from day zero,” says Gabriel Kra, who is also managing director at Prelude Ventures along with Cupta.

Kra was a guest on the second episode of Zero, where we discussed the role of venture capitalists in helping cleantech startups beyond providing money, dove deeper into the climate bill and took a fun diversion to talk about getting arrested at protests. You can listen to the episode and subscribe to Zero now on Apple, Spotify, Google, Stitcher or wherever you get podcasts.

For VCs who made their money backing software companies, investing in climate tech is a little different. While it still matters who the entrepreneurs are, it’s even more imperative that the technologies actually work. Any proposed solution for saving the planet can be — and should be — tested with known science. This makes it easier to find good ideas, according to Dipender Saluja, a partner at Capricorn Investment Group.

“I find it very hard to look into a crystal ball and say selling pet food on the internet is going to be a big deal,” says Saluja, who has turned huge returns on bets made on electric-car giant Tesla and satellite-company Planet Labs. “But on the other hand, if I look at what are the kinds of things that the world can't do without and if I can find a company to build it, that to me is actually quite easy.”

Akshat Rathi writes the Zero newsletter, which examines the world’s race to cut emissions. You can email him with feedback.