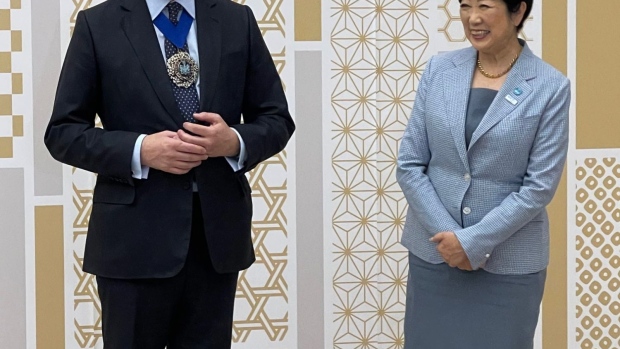 The Sumida River flows through Tokyo, Japan, on Friday, Dec. 25, 2020. Japan's infrastructure is already one of the world’s safest, and investment in mitigating natural disasters is ramping up. Photographer: Toru Hanai/Bloomberg , Bloomberg

(Bloomberg) -- Tokyo could become a global leader in green “transition” finance that helps heavy carbon-emitters reduce their footprint, according to an executive at a public-private partnership charged with bolstering the capital’s financial ecosystem.

Transition finance is the concept of investing in companies to help them cut emissions, something the government is pursuing on the way to its target of carbon neutrality by 2050. Building a market in Tokyo to enable such financing of manufacturers across Asia, could also strengthen Japan’s supply chains and economic security, according to the executive director of the Organization of Global Financial City Tokyo.

“We are looking for ways to build a market in Tokyo that can take the lead in transition finance,” Keiichi Aritomo told Bloomberg in an interview last week. He added the group is putting together a proposal that he will seek to have reflected in the government’s economic plan for next year. Details of the proposal were not yet available.

European financial institutions are increasingly unwilling to invest in carbon-intensive industries, making it harder for some of the manufacturing businesses that are particularly numerous in Asia to obtain the financing needed to reduce their footprint.

“We understand the situation in Asia far better than Europe does,” Arimoto added. “We can explain Asia’s needs to the world.”

The problems facing transition finance have also been highlighted by Vincent Keaveny, the Lord Mayor of London. During a June visit to Tokyo, Keaveny told Bloomberg that some international standards of taxonomies may be too restrictive.

We must make sure “the perfect is not the enemy of the good,” he said, adding that financiers must “find a way to ensure that companies can move from the very brown world that some of them inhabit to the green future that we’ve all wanted to achieve.”

The Organization of Global Financial City Tokyo is a partnership between the Tokyo Metropolitan Government and several dozen financial and other corporations, whose mission is to attract overseas financial institutions to Japan. Prime Minister Fumio Kishida is also seeking to nudge the often reluctant Japanese to invest their savings to increase their income.