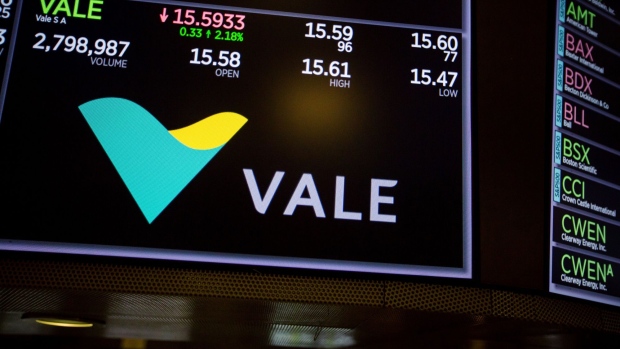 A monitor displays Vale SA signage on the floor of the New York Stock Exchange (NYSE) in New York, U.S., on Monday, Oct. 22, 2018. U.S. equities swung between gains and losses as investors downplayed an overnight rally in Asian equities ahead of a spate of earnings reports this week. Photographer: Michael Nagle/Bloomberg , Bloomberg

(Bloomberg) -- Vale SA, the biggest producer of mined nickel, closed a deal to divest its underperforming New Caledonian mine to a group that includes the operation’s managers and workers.

The divestment will allow operations to continue and gives Vale the right to a portion of output amid growing demand for the battery metal, Rio de Janeiro-based Vale said in a statement Wednesday. Tesla Inc. will support the operation through a “technical and industrial partnership” with the consortium, called Prony Resources.

Vale had intended to mothball the facility if the deal fell through after a string of financial and operational setbacks. Vale picked up the Goro project as part of its 2007 acquisition of Inco. It was brought online late and over-budget in 2010 and never reached more than 70% of capacity, showing the difficulties producing nickel from laterite deposits using the high pressure acid leach process. Vale will focus on base metal assets in Brazil, Canada and Indonesia.

Protests by independence activists in New Caledonia had blocked access to facilities, disrupting processing. Operations recommenced this week with the restart of nickel production expected in mid April, Prony said in a separate statement.

The consortium, which includes Singapore-based Trafigura and is supported by New Caledonian and French authorities, is taking a majority interest.

“Vale’s intention since the beginning of the divestment process was to withdraw from New Caledonia in an orderly and responsible manner,” the company said. “This deal accomplishes that.”

The exit comes with a cost. The transaction provides a financial package of $1.1 billion, of which Vale Canada Ltd. will contribute $555 million to support the continuity of operations. The financing for a sustainable development pact will also be provided by Vale, it said, without elaborating.

The deal gives Trafigura a 19% stake and an offtake agreement. Investment firm Agio Global also has a minority interest, Prony said, without giving the size.

Vale had a Goro sale arrangement in place with New Century Resources Ltd., but the Melbourne-based firm said in September that it was unable to generate a suitable funding package and equity structure.