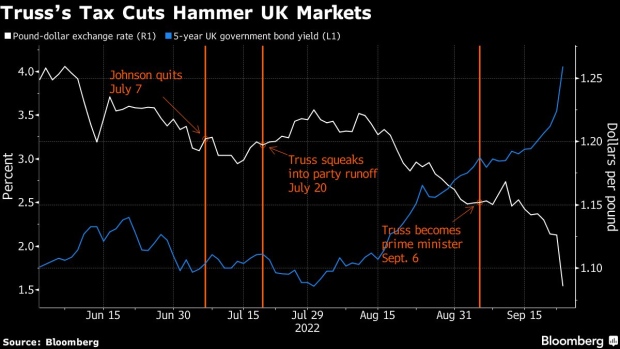 The Bank of England headquarters in London, UK, on Wednesday, Sept. 21, 2022. The Bank of England on Thursday is set to raise interest rates and start selling assets built up during a decade-long stimulus program, a historic tightening of monetary policy designed to clamp down on inflation. Photographer: Jose Sarmento Matos/Bloomberg , Bloomberg

The Bank of England may need to step in with an emergency rate rise to calm market nerves about the government’s economic plans, Conservative lawmakers said after the pound tumbled to a record low against the dollar.

An emergency rise in interest rates looks increasingly likely, they said -- a very bad sign for Prime Minister Liz Truss and her Chancellor of the Exchequer, Kwasi Kwarteng.

“When you start getting an emergency anything, the political optics are dire,” said one former minister, who asked not to be named discussing internal party maneuvers.

Another Tory MP said support for the so-called mini-budget is not widespread among their parliamentary colleagues. That skepticism extends to members of the government, not just backbenchers, the MP said, adding that while there has been some discussion about voting down the plans, the idea is not yet mainstream among Tory MPs.

The rout began on Friday when Kwarteng unveiled the biggest fiscal giveaway in half a century, and continued on Monday after the chancellor pledged there’s “more to come” on tax cuts, stoking market concerns that the government will send inflation and public debt soaring.

Kwarteng added no significant new spending, though he did put a price tag on the government’s energy bill-bailout for homes and businesses, which he said would cost £60 billion over 6 months.

The turmoil threatens to engulf Truss’s days-old administration as the country grapples with a cost-of-living crisis.

The main opposition Labour Party is already seeking to capitalize on the disarray, with Leader Keir Starmer on Sunday vowing to reverse the most eye-catching of Kwarteng’s tax cuts -- a reduction in the top rate of income tax.

“The net result of Friday so far is taxes down for the richest and prices up for working people,” Starmer said Monday at a Bloomberg business event at Labour’s party conference in Liverpool. Shadow Chancellor Rachel Reeves suggested in a Bloomberg television interview that Kwarteng is working at cross-purposes with the BOE.

While Truss’s Conservatives in theory have a majority of close to 80 seats, in practice she has much less room to maneuver due to the widespread skepticism about her approach in the parliamentary party. Two thirds of Tory MPs voted against the new prime minister in this summer’s leadership election before she won a runoff vote of the party’s grassroots members.

The premier has exacerbated her problems with Tory MPs through her decision not to keep on ministers who supported her rival, Rishi Sunak, instead leaving them on the back benches with grudges to nurse and free from the collective responsibility that comes with government posts.

Read More: Even Liz Truss Supporters Worry She Could Wreak Havoc for the UK

Tory MPs reacted with horror as the pound headed toward parity with the dollar. The former minister said the comments indicate a casual indifference to market realities and that Kwarteng and Truss are in the midst of an ideological low-tax obsession, which won’t deliver growth quickly enough to stabilize the public finances.

Another MP said that interest rates would inevitably have to rise, forcing up mortgage rates, which is always politically damaging, while two others said that Kwarteng needs to hold his nerve. Research shows home ownership is one of the biggest factors in driving voters to support the Tories.

A person familiar with the administration said Kwarteng is holding private meetings with investors to reassure them and is likely to meet the central bank governor Andrew Bailey. No emergency meeting would be scheduled for fear of spooking the markets further, the person said.

The Bank of England already raised its benchmark rate by 50 basis points last Thursday, the day before Kwarteng’s tax statement. That’s the seventh consecutive rate-hike from the Bank as it struggles to contain inflation which is running at close to the fastest pace in 40 years.

In the wake of Friday’s market ructions, Kwarteng himself told the Financial Times that he was “calm.”

“Markets move all the time,” he said. “It’s very important to keep calm and focus on the longer-term strategy.”

On Sunday, he told the BBC that he doesn’t comment on markets, and promised more tax cuts. “We’ve only been here 19 days,” he said. “I want to see, over the next year, people retain more of their income.”

But Kwarteng’s calm wasn’t share either by the markets or his own MPs.

The pound on Monday saw its biggest intraday decline since March 2020, when investor panic over the then-nascent Covid-19 pandemic roiled markets worldwide. The move to as low as $1.0350 lifted the odds on the currency hitting parity with the dollar this year to around 50%.

Another MP expressed worry over how the tax cuts planned by Kwarteng will drive inflation while a separate colleague concerned about whether Britain will be able to service its debts.

As well as scrapping the top level of income tax, Kwarteng cut the basic rate by a percentage point, and reversed a rise in the National Insurance payroll tax brought in earlier this year.

The Liberal Democrats called on the government to recall Parliament to address the impact of the “shambolic” mini-budget. The Scottish National Party echoed the request.

Truss’s spokesman Max Blain was asked by reporters if the prime minister would offer public reassurance to the market. He pointed to a “positive reaction” from some business groups when asked whether Friday’s fiscal event was a success.

“This is a plan for the medium to long term, which is about fundamentally changing our approach to the economy with a focus on growth,” Blain told reporters in London. That will give the Treasury more income to pay for priorities like the National Health Service and helping Britons struggling with the cost of living, he said.