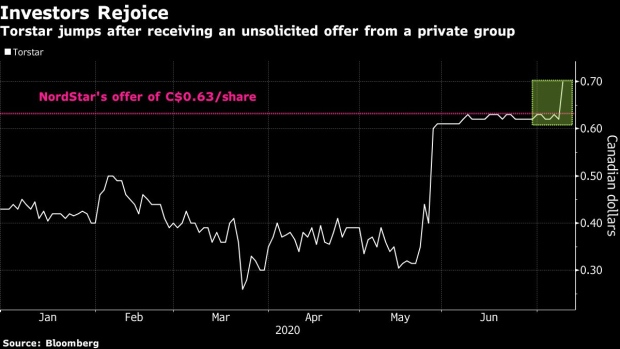 (Bloomberg) -- Torstar Corp. rallied to an eight-month high after receiving an unsolicited offer to purchase the company by a private investor group, less than two weeks before shareholders were set to vote on an initial buyout deal by two prominent Canadian business families.

Shares of the Toronto Star parent skyrocketed 16% to 72 Canadian cents on Thursday as it resumed trading after saying a competing proposal may result in a “superior offer” to an earlier bid from NordStar Capital LP. While no final decision has been made, Torstar said it’s now in discussions with the new group.

NordStar, owned by the Rivett and Bitove families, had offered to buy Torstar for 63 Canadian cents a share in cash in May, making for a price tag of C$51 million.

The original deal is still “in the best interest of the company,” Torstar’s board said in a press release Thursday. “The board continues to recommend that Torstar shareholders vote in favor of the NordStar transaction.”

The break fee in the NordStar contract is C$3.5 million. Currently, the arrangement has the support of Torstar’s board and its largest independent shareholder Fairfax Financial Holdings Ltd., ahead of a special meeting on July 21.

Nordstar has no plans to increase its offer. Its bid fully values Torstar based on expenses it will have to incur to grow the company and its newspapers, a spokesperson for the company said in a statement provided to BNN Bloomberg.

NordStar is controlled by Jordan Bitove and Paul Rivett. Rivett was a senior executive at Fairfax, a Toronto-based insurance and investment holding company, when it built its 40% stake in Torstar’s Class B shares. He announced his retirement from the firm in February.

Bitove is a private equity executive whose family was part of the ownership group that brought the Toronto Raptors basketball franchise to the city in the 1990s.

Torstar, which also publishes more than 70 other newspapers, has been unable to turn around years of losses in advertising revenue. Before Nordstar’s offer, Torstar’s shares had slumped almost 80% since the end of 2017.