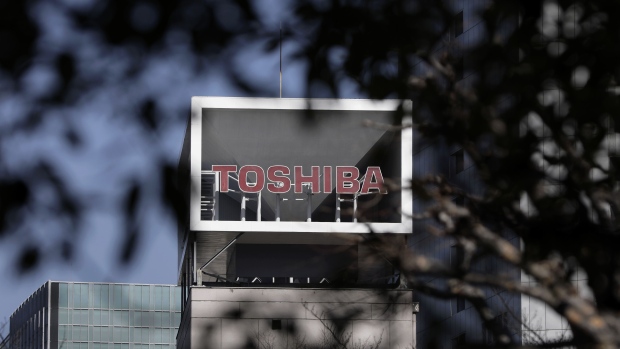 Signage for Toshiba Corp. is displayed at the company's headquarters in Tokyo, Japan, on Wednesday, Feb. 14, 2018. , Kiyoshi Ota/Bloomberg

​Toshiba Corp. surged its daily limit of 18 per cent after confirming it received an initial buyout offer from CVC Capital Partners, setting the stage for potentially the largest private equity-led acquisition in years.

The Japanese conglomerate said it’s seeking more information while it weighs the proposal. Its board plans to meet Wednesday to discuss the potential deal, a person familiar with the matter said. Shares of Toshiba surged their most since 2017 to a four-year high in Tokyo, taking its 2021 gain to 57 per cent and market value to roughly US$19 billion.

The bid comes as Toshiba faces scrutiny from activists following a series of scandals, including a record fine for faulty accounting, billions of dollars in writedowns and a bungled foray into U.S. nuclear power. The company brought in Chief Executive Officer Nobuaki Kurumatani -- a former senior CVC executive -- to repair investor confidence. The Japanese conglomerate today remains a major player in defense and energy at home and owns a major slice of Kioxia Holdings Corp., which is said to be focused on pursuing an initial public offering as soon as this summer.

The Nikkei reported earlier CVC plans to propose a deal to take Toshiba private through a tender offer that could be worth more than US$20 billion. A formal proposal may be unveiled as soon as Wednesday, according to the newspaper. That would make it the largest private equity-led buyout since 2013, and CVC’s biggest acquisition on record.

“The shareholders may be receptive given that the deal appears to offer a premium,” said Naoki Fujiwara, chief fund manager at Shinkin Asset Management Co. But “the government will also need to give its approval because of Toshiba’s involvement in defense. There are still a lot of questions around whether this kind of deal is achievable at all.”

Toshiba’s involvement in a number of sensitive industries may complicate government approval for a sale to a foreign entity. A takeover faces government scrutiny due to its deep involvement in decommissioning the wrecked Fukushima Dai-Ichi nuclear power plant, a process that will take decades. The company developed a system to purify tainted radioactive water seeping into the facility, and is working with the utility to devise a plan to search for and remove melted fuel debris at the bottom of the reactors.

Regulators aside, Kurumatani -- the first outsider to lead Toshiba in more than 50 years -- may also have to grapple with unhappy shareholders. Last month, investors passed a resolution put forward by Singapore-based Effissimo Capital Management, Toshiba’s largest shareholder, calling for an investigation into the fairness of voting at the 2020 annual shareholders’ meeting.

Toshiba’s nuclear-power business may make government approval difficult for its buyout offer from CVC capital partners and others. Yet the deal may shine further light beyond nuclear power and onto the core growth business related to national security, such as power devices and quantum key distribution, with the latter having the potential to boost profit 10 per cent by 2030, in our scenario.

A Toshiba deal would be the second initiated in Japan this year by CVC, which is buying Shiseido Co.’s personal care unit in a US$1.5 billion deal. The buyout firm, which tends to focus on smaller-sized deals than the one it’s said to be contemplating for Toshiba, was said to have completed a 21.3 billion-euro (US$24 billion) fundraising for its eighth flagship fund last year.

Private equity firms have announced US$15.1 billion of deals targeting Japanese firms over the past 12 months, according to data compiled by Bloomberg.

Toshiba’s remaining stake in its former memory chipmaker, Kioxia, is among its more valuable assets. The company, which makes NAND flash memory chips, is considering going public and could be valued at more than US$36 billion in the current market, said Hideki Yasuda, an analyst at Ace Research Institute. Toshiba is also a partner in nuclear energy with Tokyo Electric Power Co.