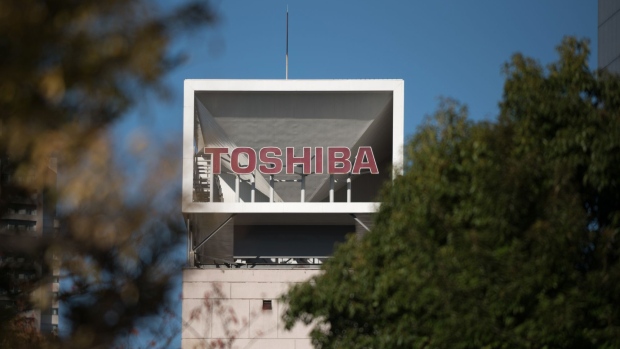 Signage for Toshiba Corp. is seen at the company's headquarters in Tokyo, Japan, on Thursday, Nov. 9, 2017. Toshiba is speeding up investments into a new flash-memory plant even as participation of its joint venture partner Western Digital Corp. remains unclear, ratcheting up the pressure on its U.S. counterpart to resolve a legal spat between two companies. Photographer: Akio Kon/Bloomberg , Bloomberg

(Bloomberg) -- Toshiba Corp.’s shares surged the most in three years after the company said it will return to the first section of the Tokyo and Nagoya stock exchanges following an extended absence.

The stock rose as much as 16% to 3,445 yen ($33.20) in Tokyo on Monday, the biggest intraday gain since July 2017. The move, set for Jan. 29, means the company’s shares will be added to market indexes so domestic active funds can buy the stock, Atul Goyal, senior analyst at Jefferies, wrote in a report describing it as “inexpensive.”

Toshiba was demoted to the second section of both exchanges in August 2017 and narrowly avoided a delisting as multibillion-dollar losses at its Westinghouse U.S. nuclear unit pushed liabilities beyond its level of assets. It was forced to sell its prized semiconductor business and take an infusion of cash from a large contingent of activist shareholders. The writedowns and accounting scandals triggered a management shakeup and the appointment of Nobuaki Kurumatani, an outsider, to the post of chief executive officer.

Moving up to TSE-1 will allow Toshiba to rejoin the Topix index on the last trading day of next month, at the market close on Feb. 25, said Travis Lundy, a special-situations analyst who writes for Smartkarma. The inclusion will require passive funds to buy 58 million shares, or 13% of outstanding stock, he estimated.

“A Topix inclusion of this size is a rare species,” Lundy wrote in a report. “Long-suffering activists may rejoice. This creates liquidity for a partial exit.”

Kurumatani in December signaled Toshiba is ready to again pursue acquisitions and business expansion, though in a more circumspect and cautious manner than previously. He also reaffirmed Toshiba’s intention of unloading its stake in former flash memory unit Kioxia, which he said no longer fit with his company’s remaining businesses.

“One thing that changed is that I’m in charge now,” the CEO said in an interview with Bloomberg News. “The board is also applying very stringent standards to acquisitions. It’s a completely different company when it comes to the rigor brought to thinking about and screening deals.”