Thousands of hydrogen-fueling stations will be needed in the next 5 to 10 years: Raghu Kilambi

Toyota Motor Corp. trimmed its production outlook for this year by about 3 per cent because the spread of the coronavirus in Southeast Asia has disrupted access to semiconductors and other key parts.

The world’s No. 1 automaker, which is adjusting output in September and October, now expects to produce 9 million vehicles in the fiscal year through March, down from 9.3 million previously forecast. The company is sticking to its forecast for operating profit of 2.5 trillion yen ( US$22.7 billion) this year, factoring in the potential to reduce costs.

Toyota warned last month of cuts due to the chip and parts shortages as COVID-19 coursed through the key Southeast Asia manufacturing region, shuttering or impacting factories in places such as Malaysia to Vietnam. The move shows how even Toyota, having weathered the shortages well compared with peers, is vulnerable to the same constraints hurting the wider industry. The automaker is renowned for its supply-chain savvy, honed over decades. 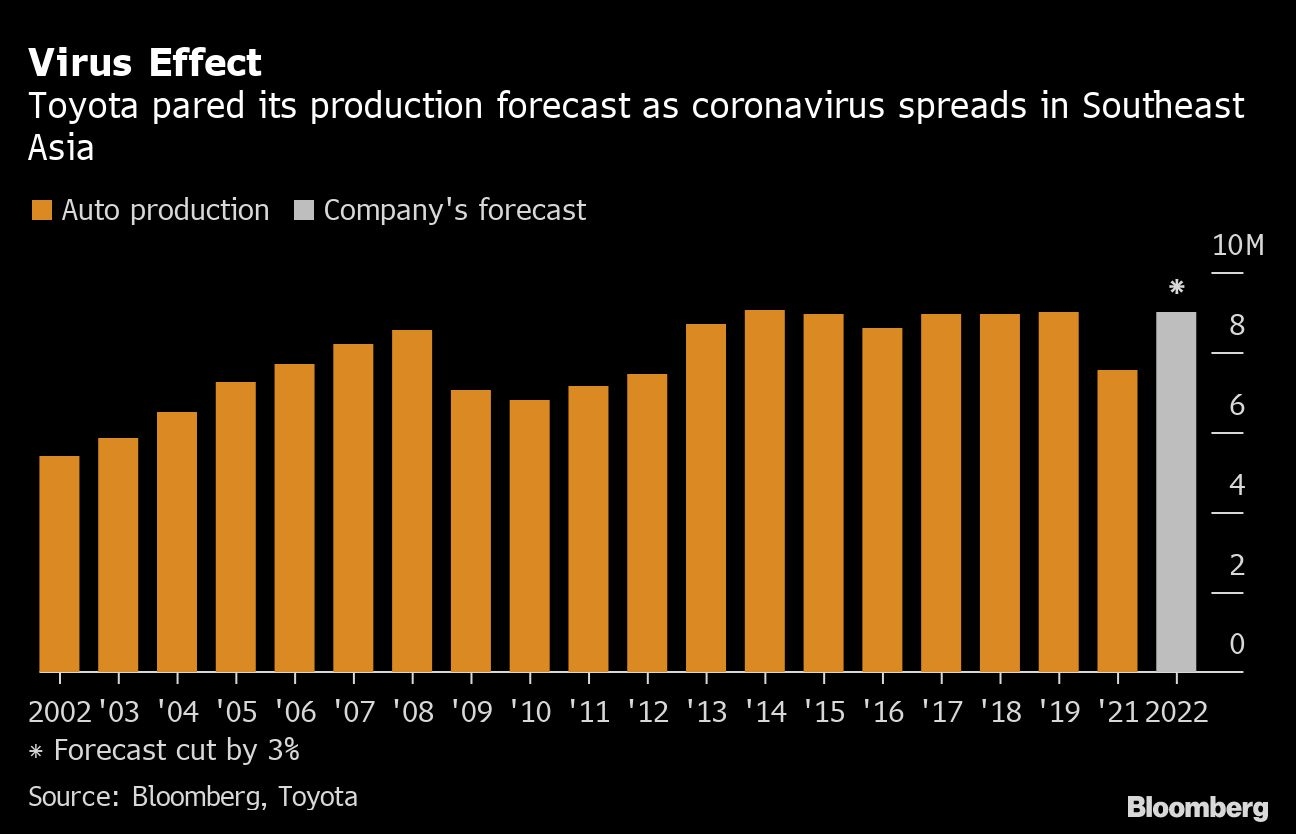 COVID continues to impact suppliers in Southeast Asia, Toyota Chief Purchasing Group Officer Kazunari Kumakura said Friday. Though the automaker is also being impacted by the industrywide shortage of semiconductors, the spread of COVID is the “overwhelming” reason for the most recent planned cuts, he said.

Toyota had planned a high level of production for the latter half of the fiscal year and will try to recover as much lost output as possible, Kumakura said. The company is seeking to secure substitute parts to meet inventory-depleting global demand for cars. Toyota partially halted production in China in January and reduced output at five factories in North America because of the chip crunch, while COVID shutdowns have also disrupted operations.

Given the timing and magnitude, Toyota’s production cut “is a shock,” according to Bloomberg Intelligence analyst Tatsuo Yoshida. “Conditions are changing so fast, even Toyota can’t see the future,” he said. “Toyota says it will maintain its earnings forecast, but what about other companies?”

Japanese automakers have over the past decade invested heavily in Southeast Asia, a source of cheap labor and a supplement to their China operations amid trade tensions between that country and the U.S. Thailand is a major production hub for Toyota, Mitsubishi Motors Corp., Honda Motor Co. and Nissan Motor Co.

Carmakers globally have lost revenue because shortages have slammed output. India’s largest automaker by deliveries, Maruti Suzuki India Ltd., said volume would likely drop to about 40 per cent of normal in August. Japan’s Suzuki Motor Corp. is cutting vehicle production by 20 per cent in September, while Renault SA plans to halt assembly plants in Spain for as long as 61 days before the year’s end.

Expectations that Toyota had an overly conservative outlook for the year will quickly fade, Yoshida said, adding that “negative impact on shares will likely be large.” Toyota closed up 0.6 per cent before the announcement.