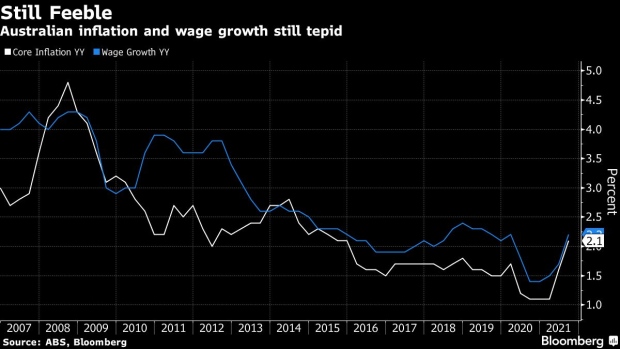 (Bloomberg) -- Bond investors expecting Australia to follow New Zealand and South Korea with interest rate hikes in a matter of months could still be too aggressive in their thinking.

New Zealand raised rates Wednesday and flagged more hikes next year while Korea looks set to tighten Thursday. Markets are currently betting the Reserve Bank of Australia will raise rates as soon as May -- way ahead of Governor Philip Lowe’s guidance for 2024.

But there’s a crucial difference that raises the odds against such timing. While the RBNZ and BOK are acting in the traditional central banking method of tightening before inflation becomes set, the RBA has changed tack after years of undershooting on prices and wants to see actual figures show a sustainable trend before it hikes.

“The test that we’ve set is for inflation to be sustainably within the 2 to 3% range,” Lowe reiterated at a press conference after the bank’s Nov. 2 meeting. “We want to see inflation get sustainably back to 2.5%.”

Underlying inflation, or the trimmed gauge tracked by the RBA, was 2.1% in the third quarter, below the midpoint of its range.

Lowe’s repeated use of “sustainably” suggests more than one quarter of data will be needed to convince the governor, and he won’t accept inflation hovering near the bottom of the target either. Lowe has said he wants “a reasonable degree of confidence” that inflation will not slow again once the RBA starts to tighten.

If the central bank wanted to see three quarters of inflation at or above the midpoint, this would suggest the earliest it could move is August 2022, after data for the second quarter is released.

But such strong inflation outcomes would be a significant shock given the lack of upward pressure on prices from wages. A lack of churn in the labor market compared with economies like the U.S. keeps Aussie wage growth down. Then there’s the fact that much of the local wage-setting process is based on long-term contracts with a 2.5% ceiling, or less in some cases.

“Our view is that inflation here is unlikely to accelerate to anywhere near the levels seen in places like the U.S.,” said Hayden Dimes, an economist at Australia & New Zealand Banking Group Ltd. “Though we expect wages will accelerate, we don’t think it will reach U.S. levels for some time.”

That outlook is largely shared by economists in a Bloomberg survey that shows headline CPI is seen above the 2.5% midpoint this year and staying high in 2022, but then slipping back to 2.3% the following year. Wages growth is forecast to barely hit 3% by 2023.

Swaps markets are fully pricing in a 15 basis-point hike in May that would take the cash rate to 0.25% from the current record-low 0.10%, then two more quarter-point rises -- with the chance of a third -- over the remainder of 2022.

Benchmark three-year bond yields have dropped about 30 basis points from a high of 1.28% late last month, suggesting the most aggressive bets from traders are being scaled back as Lowe maintains a consistent line. The yield on 10-year bonds has slipped by a slightly smaller amount, bringing a modest flattening in the yield curve.

Lowe says wages growth probably needs to be 3% or higher in order to maintain inflation around the 2.5% target midpoint. Still, the RBA’s resolve has been tested by markets already and investors proved right when the central bank dropped its yield target at the Nov. 2 policy meeting.

Lowe has not completely ruled out a scenario where inflation quickens sufficiently to warrant a hike next year. “The probability of unwinding the decades long decline in wages growth in just six months is very low, it’s not zero, but close to zero,” he said last week.