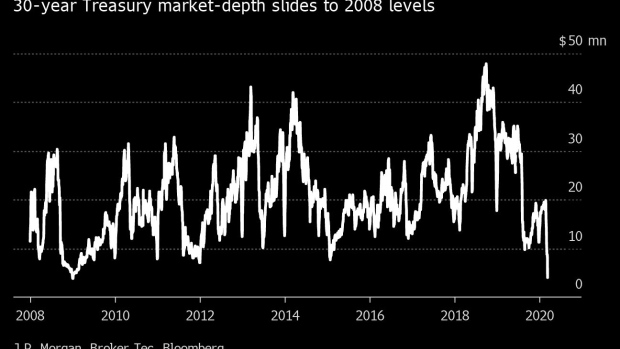 (Bloomberg) -- As the old adage goes, “it’s bad to be slow in a fast market.” Asset mangers say they’re living the worst of both as Wall Street traders work from home.

Columbia Threadneedle Investments’ Gene Tannuzzo said completing trades is harder then ever, in part because many dealers working remotely don’t have full capacity to transact. Lon Erickson of Thornburg Investment Management said it’s taking longer to get all parties on the phone to “spot” -- or agree on where a Treasury yield is in order to price a corporate bond.

“It can increase the wait and anxiety because Treasuries move a lot in five minutes in this current market,” said Erickson, a portfolio manager. “And if you are in a knife fight over individual basis points on a daily basis, that will be more anxiety than you maybe want to live with.”

A swath of the world’s traders, analysts, sales personnel and money managers are working from home on makeshift arrays of monitors some have dubbed “Rona Rigs,” for the coronavirus pandemic that’s forcing Wall Street to lock down trading floors to all but the most essential staff. While there are some fans of telecommuting, complaints abound among traders over poor WiFi internet connections, small screens, lack of access to office resources and kids running crazy in the background.

Tannuzzo, whose own issues at home include trying to prevent his children from sucking up the broadband with Netflix, said it’s “taking more time to get trades done, especially in any size.”

In a missive to clients this week, Deutsche Bank AG research strategist Jim Reid rattled off a list troubles doing his job at home, including that his mobile reception died and that his house has no landline phone.

Far from mere annoyances, such experiences are raising concerns that trading and liquidity are getting constrained enough to exacerbate market swings.

The 30-year Treasury yield has swung between as low as 0.699% and as high as 1.928% since March 9, with an average daily range exceeding 30 basis points. A wild 35 basis-point daily trading range on Wednesday came a day after the yield surged in its biggest one-day increase since 1982. Ten-year U.S. notes yield about 0.93%, up from a historic low of 0.31% set last week.

Dealers had been warning for years that capacity to make markets would be dimmed by regulations passed after the 2008 financial crisis that forced them to boost capital and cut leverage. But virtually nobody predicted that when volatility surged, banks would have to break up their trading desks, sending some to backup sites and legions to their living rooms.

By Wednesday, evaporating liquidity in the $6.6 trillion-a-day currency market helped drive the pound down as much 5% to its lowest since 1985. A key gauge of Treasury liquidity known as market depth, or the ability to trade without substantially moving prices, has plunged to levels last seen in the 2008 crisis, according to data compiled by JPMorgan.

While investment banks have issued edicts to employees to work from home if possible, the directives don’t extend to every trader, many of whom rely on powerful computers and speedy internet connections to do their jobs. Some still commute to thinned-out trading floors, others to so-called recovery facilities.

In London and Switzerland, traders still working on the floors of firms including Barclays Plc, HSBC Holdings Plc, Credit Suisse Group AG and Nomura Holdings Inc. said they dread the prospect of being sent home. Some even said they would rather continue coming in, even if it risks getting infected.

Traders on both sides of the Atlantic fret that at-home systems would be too slow to refresh prices during busy times, particularly around events such as surprise actions taken by the Federal Reserve and other central banks. Emerging-market currencies can be especially difficult to handle, with forwards sometimes out of control, said a trader at Commerzbank AG pointing to the Turkish lira and the Israeli shekel.

The situations of those at home vary: Junior traders typically have lower risk limits and less authority to make decisions while dealing remotely with clients. More senior traders might have higher limits, but be constrained in their ability to process large transactions from home setups. That can mean having to relay business back to colleagues in the office.

One complication is the need to record phone calls. In the office, they’re documented for regulatory requirements and closely monitored with software to detect unusual activity. The Financial Industry Regulatory Authority, a watchdog for brokerages, said it would give firms more flexibility in supervising employees working remotely and in relocating personnel to temporary locations.

Tony Farren and his teammate Glen Capelo at Mischler Financial Group are among those who see coming into the office as the only way to efficiently trade for clients. At their office in Stamford, Connecticut, they have 12 screens between them to monitor markets. At home that number falls to four.

“To best serve our clients we need to be in the office, with full trading capabilities,” Farren said. “We also are not commuting to the city, so we have less risk than those going into New York.”

For DoubleLine Capital’s Greg Whiteley, the rigors of working from home are less about technical difficulties: It’s the blurred line between professional and personal life. The Los Angeles-based portfolio manager of government securities said he feels like he’s always on the job.

“It sort of makes the week one long day instead of a series of separate days,” he said. “I have the work station set up here at home and I’m wandering past, checking on the market and having conversations with colleagues about 16 hours a day.”