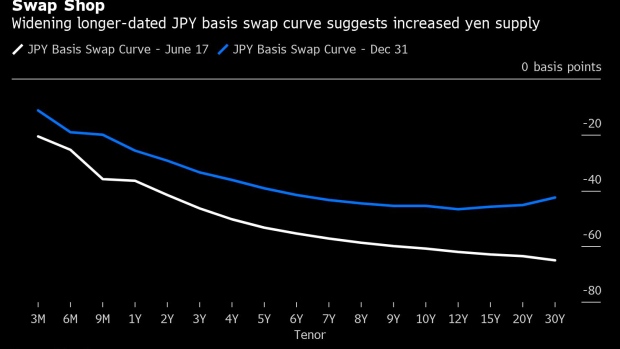 The Marriner S. Eccles Federal Reserve building stands in Washington, D.C., U.S., on Tuesday, March 17, 2020. The Trump administration is backing sending direct payments of $1,000 or more to Americans within two weeks as part of an $850 billion plan to blunt some of the economic impact of the widening coronavirus outbreak. Photographer: Andrew Harrer/Bloomberg , Bloomberg

(Bloomberg) -- The cost of the dollar is becoming pivotal to bond investments and borrowing strategies in a world where every basis point of return has to be eked out.

With the Federal Reserve’s fingerprints all over funding markets, the dynamics of using foreign-exchange swaps and cross-currency basis to juice up returns and lower borrowing costs have shifted since the worst of the coronavirus selloff in March.

Here’s a look at some options available to investors that explore the interplay between funding, currency and bond markets as the world’s stock of negative-yielding debt jumped by more than $5 trillion in the past three months.

The Federal Reserve beefed up existing swap lines in March allowing cheap access to the U.S. currency to many overseas banks. But that penalizes investors already flush with dollars, who lose their edge for going abroad.

For example, lending dollars for euros in currency markets earns traders about 0.8% a year, less than half the five-year average of 2%.

With most of the safest government bond yields in Europe already negative, U.S. investors have to look to credit markets. Short-dated corporate bonds denominated in euros and sterling offer attractive pick-ups over American peers, though given the relatively steep shape of the U.S. curve, this disappears past the seven-year point.

The traditional investment for Japanese investors is U.S. Treasuries -- they own $1.3 trillion of them. But with benchmark Treasury yields trading close to historic lows, the Asian funds are showing signs of taking on more risk. They bought the biggest amount of American corporate debt in eight years in March, a record amount of agency bonds and shed Treasuries.

It’s easy to see why.

A composite of U.S. 10-year fixed-rate bonds issued by investment grade firms offers yields in the region of 1.8%, according to data compiled by Bloomberg. A Japanese investor, employing three-month rolling hedges, earns around 1.3%, well above the 0.1% of a hedged 10-year Treasury-note.

Meanwhile, Japanese investor demand for longer-term basis swaps is growing as they seek to lock in cheap hedge costs for as long as possible, according to Takahiro Sekido, chief Japan strategist and head of global yen strategy at MUFG Bank Ltd.

Yen-dollar basis for 30-year contracts plunged to its most negative this year in late May, and has stayed near those levels even after the Fed flooded markets with liquidity. That’s indicative of how Japanese investors are paying a higher premium to swap their currency for dollars for the long-term, which is evident in the widening longer-dated basis curve.

The trend is not just a Japanese one.

“The cost of currency hedging for local investors such as insurance companies has fallen from about 1.2% to 0.2% since the Fed announced its zero-rate policy last March,” said Kim Duyoung, Seoul-based chief investment officer of the global investment division at NH-Amundi Asset Management Co.

“We are recommending institutions and individual investors to invest in dollar assets above everything,” he said.