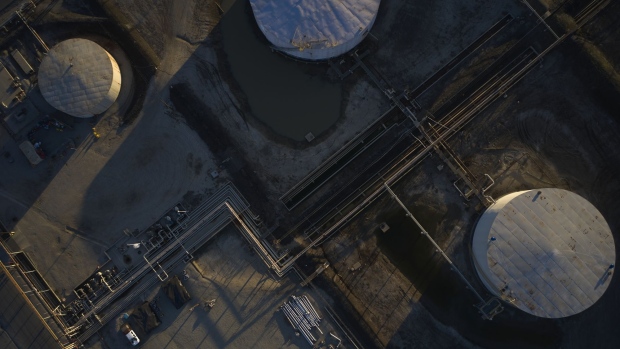 Storage tanks at the Torrance Refining Co. in Torrance, California, U.S., on Monday, Feb. 28, 2022. The U.S. and its allies are discussing a coordinated release of about 60 million barrels of oil from their emergency stockpiles after Russia’s invasion of Ukraine pushed crude prices above $100. Photographer: Bing Guan/Bloomberg , Bloomberg

(Bloomberg) -- There’s downward pressure on oil prices in the short term, but further out the market is vulnerable to sudden price spikes, according to the world’s biggest commodity trader.

Sustained under-investment and very little spare capacity will be tested if demand comes back rapidly, said Saad Rahim, chief economist at Trafigura Group. The loosening of China’s Covid Zero policy could quickly lift consumption, prompting a rush for supplies that the market won’t be able to meet, he said.

“We’re potentially moving from a world of commodity cycles to a world of commodity spikes because of the under-investment that has taken place in the last decade,” he said in an interview on the sidelines of the APPEC 2022 conference hosted by S&P Global Commodity Insights in Singapore.

Global benchmark Brent crude has fallen around 40% from a high in early March on a combination of monetary tightening, recession fears and a surge in the dollar. Saudi Arabia and others, however, have complained that extreme volatility and a lack of liquidity mean the futures market is increasingly disconnected from fundamentals.

The macroecnomic headwinds will keep oil prices under pressure in the short term, according to Rahim. For the moment, that’s outweighing supply risks including the threat of a sharp curtailment in barrels from Russia due to the European Union embargo and the longer-term consequences of under-investment, he said.

If, for example, the world needed an additional 2 to 3 million barrels a day of oil supply due to recoveries in China or the US, producers would struggle to find those supplies as there’s very little spare capacity, Rahim said.

“My view is that people who were not investing at $100 to $120 a barrel this year aren’t going to be investing when it’s $70 to $90,” he said, adding that the extreme volatility in prices also complicates investment decisions.

Other events that could prompt a sudden rebound in demand include the Federal Reserve pausing tightening, a post-winter recovery in Europe and the US summer driving season next year, he said.

Commodity traders like Trafigura have become busier due to inefficiencies in the market, such as Russian shipments having to travel longer distances, Rahim said. The company is now trading about 7 to 8 million barrels of crude and refined products a day, around three times as much as in 2015, he said.