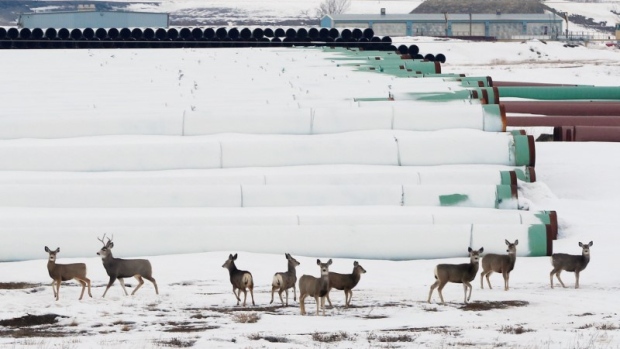 LINCOLN, NEBRASKA — Nebraska regulators on Tuesday denied TransCanada Corp's (TRP.TO) request to amend its route application for the proposed Keystone XL pipeline through the U.S. state, a potential setback for the company as it seeks to head off legal challenges.

The Nebraska Public Service Commission (PSC) issued an approval for the line in late November, removing what appeared to be the last big regulatory obstacle for the long-delayed project, which has been backed by U.S. President Donald Trump.

But the commission's approval was not for the route TransCanada had singled out in its application. Instead, the commission approved an alternative route that shifts it closer to an existing pipeline right-of-way down the eastern side of the state, a move opponents of the pipeline have said violates state statutes.

TransCanada filed a motion last month with the commission seeking permission to retrospectively amend the route application, a move that a company official said was intended to prevent lawsuits that could delay the project.

The commission on Tuesday voted 5-0 against the motion.

TransCanada said in a statement that it would review the decision to determine next steps for Keystone XL, but added that it believed the project remained economically viable.

"It is important to remember that this project has widespread support within the U.S. and Canadian federal governments,  as well as state officials in Montana, South Dakota and Nebraska," the company said.

Ken Winston, a lawyer for environmental group the Sierra Club, said he saw the ruling as a win for pipeline opponents.

"The fact that they're having to consider an alternate route and that their motion was denied continues to make it more complicated for TransCanada. And any time it's more complicated, that's a victory for us," he said.

Attorneys for landowners opposing the pipeline also said Tuesday's ruling represented a setback for the project.

"The PSC clearly recognizes that it voted on a route that was not in the TransCanada application as a route it wanted approved," said attorney David Domina. "TransCanada knows it is now in a position where it cannot go forward without a tremendous risk of reversal on appeal," he said.

TransCanada shares were down 20 cents US to US$61.61 in midday trading.

The proposed Keystone XL, which would run about 1,180 miles (1,899 km) from Hardisty, Alberta, to Steele City, Nebraska, has been a lightning rod of controversy since it was proposed a decade ago, with environmentalists making it a symbol of their broader fight against fossil fuels and global warming.

Trump handed TransCanada a federal permit for the pipeline in March as part of a broader agenda to boost the energy sector and create jobs. That reversed a decision by former President Barack Obama in 2015 to block the project on environmental grounds.