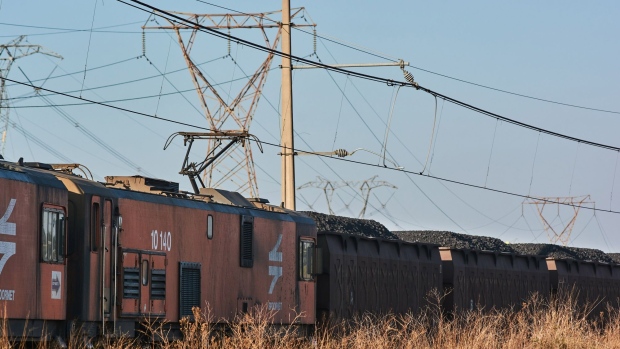 A Transnet SOC Ltd. freight train transports wagons of coal from the Mafube open-cast coal mine, operated by Exxaro Resources Ltd. and Thungela Resources Ltd., towards Richard's Bay coal terminal, in Mpumalanga, South Africa on Thursday, Sept. 29, 2022. South Africa relies on coal to generate more than 80% of its electricity, and has been subjected to intermittent outages since 2008 because state utility Eskom Holdings SOC Ltd. can't meet demand from its old and poorly maintained plants. , Bloomberg

At least 1,500 kilometers (932 miles) of cable was stolen in the current financial year, according to Transnet Chief Executive Officer Portia Derby. That’s compounded delays to exports caused by other factors including a recent derailment, a labor strike and unrest that hindered shipments.

“I can’t see a solution, frankly, on these important corridors where we have a lot to fix, more urgent than going to diesel,” even though significant investment has been made on electric trains, Derby said in an interview Wednesday on the sidelines of a conference in Cape Town. “That increases cost, but at least it improves reliability.”

Infrastructure crime such as the looting of copper power cables costs the South African economy an estimated 187 billion rand ($11.8 billion) a year, according to a September report by the Global Initiative Against Transnational Organized Crime. The theft of copper cable almost tripled in the past five years, Transnet said in October 2021.

The resulting rail disruptions have hit coal exports particularly hard at a time when prices have more than doubled for the fossil fuel. Transnet’s North Corridor line connects mines to the Richards Bay Coal Terminal, the largest such facility on the continent, that’s owned by a consortium of producers including Thungela Resources Ltd., Exxaro Resources Ltd. and Glencore Plc.

Transnet railed about 53 million tons of coal to RBCT from January to the end of October 2022, Exxaro said Thursday in a statement. The company lowered its export-sales-volumes forecast by 6% because of the deteriorating rail performance.

Transnet in November lifted a force majeure on its main coal export line more than two weeks after a train derailed on the route. The clean-up efforts were complicated by violence and what the company described as extortion by a local business group located near the incident.

Keeping such work in-house rather than contracting to outside parties also could potentially avoid such activity, according to Derby.

“Whenever there’s been a derailment, it’s like blood sport,” Derby said. People arrive at the site and demand payment regardless of whether they’re taking part in the work or not. “That kind of thing we can’t solve, we need government.”