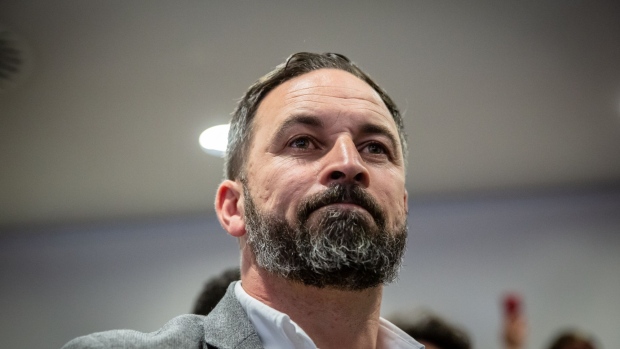 (Bloomberg) -- The Socialists might have one the most seats in Sunday’s election, but it was the Spanish nationalists of Vox who were celebrating.

After more than doubling the number of seats the party holds, Vox leader Santiago Abascal was greeted by a euphoric crowd outside its Madrid headquarters, cheering his every pronouncement.

With the rise of Vox, Spain is entering a new chapter in which the nationalist sentiments that have long been subsumed into broader parties are given their own voice in parliament for the first time in a generation. Similar movements have already upended traditional politics in France and Italy and across eastern Europe.

As news of Vox’s political breakthrough spread, Abascal was congratulated by leaders of other European far-right movements such as Marine Le Pen in France and Matteo Salvini, who pushed a hard stance on immigration as Italy’s interior minister before his ouster this year.

"This is a great advance for our friends in Vox," Salvini tweeted, with a picture of him and Abascal together. He said the media will try to label Vox as fascists and racists but that is unfair. "In Italy, as in Spain, we just want to live peacefully in our home," he said.

Vox was little more than a fringe phenomenon until last year. Now it’s the third largest political force in Spain.

Founded in 2014 by former members of the conservative People’s Party, Vox caused its first stir a year ago with a strong showing in regional elections in Andalusia. The party entered the national parliament with 24 seats in April’s general election and claimed 52 on Sunday.

“We have led a political and cultural change because we’ve managed to open up all the forbidden debates,” Abascal told his supporters on Sunday night. “We’ve sent a message to the left that history hasn’t ended, that they don’t have any moral superiority and that we have the same right as them to defend our ideas without being insulted and stigmatized.”

An eruption of violence in Catalonia caused by jail terms handed to leaders a 2017 attempt to secede from Spain played into into Vox’s hands. Among the party’s election pledges was a plan to rip up the system of devolved government that’s been in place since the dictatorship ended in order to recentralize power and get a grip on spending.

Vox also proposed deporting undocumented immigrants, erecting walls in the Spanish enclaves of Ceuta and Melilla in Africa, closing fundamentalist mosques and banning the teaching of Islam in state schools.

Unlike other far right movements in Europe, Vox doesn’t want Spain to leave the European Union but does call for changes in the governance of the bloc. At the same time, the party has a strongly socially conservative message pledging big tax cuts, help for large families and opposition to abortions and sex change operations being carried out at state hospital.s

After Sunday’s result, the supporters gathered in downtown Madrid sensed they may have a chance to put their ideas into practice.

"Presidente! Presidente!" they chanted at Abascal.

Stood next to him on the stage, his right-hand man, Ivan Espinosa de los Monteros, broke into a broad smile.

"Soon though, soon," he told his boss.

To contact the reporter on this story: Charlie Devereux in Madrid at cdevereux3@bloomberg.net

To contact the editors responsible for this story: Dale Crofts at dcrofts@bloomberg.net, Charles Penty, Ben Sills