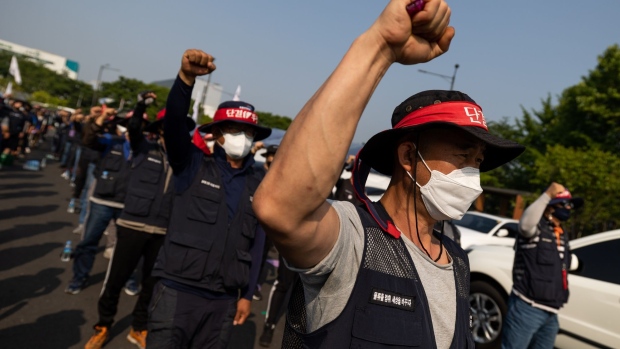 Trucks parked as a protest at the Uiwang Inland Container Depot on June 10. , Bloomberg

(Bloomberg) -- An escalating strike by truck drivers in South Korea is adding more disruption to global supply chains, from a slowdown at the country’s ports to production halts at auto factories.

Thousands of truckers have stopped work since Tuesday to protest the removal of a minimum wage scheme. Tensions are rising as drivers move to block deliveries of the Asian country’s most critical export items, including materials for semiconductor chips.

The daily volume of container boxes transported to and from the nation’s 12 ports dropped 64% on Thursday compared with the average for May, according to data from the Ministry of Land, Infrastructure and Transport. Inbound and outbound volumes at Busan, the world’s seventh-busiest port, were less than half their usual amount at 13,035 containers.

No goods went in or out of Ulsan port on Thursday, where leading automaker Hyundai Motor Group has its production facilities, the ministry said. Meanwhile, deliveries to Pohang and Daesan port dropped to zero, affecting the transportation of steel and petrochemicals.

The first large-scale strike under newly elected President Yoon Suk Yeol is fueling concerns over further disruptions to supply chains, which are already stressed after Covid-19 lockdowns in China and Russia’s invasion of Ukraine.

It’s uncertain how long the strikes will continue, but a prolonged dispute threatens to have ripple effects across the globe. South Korea is the largest exporter of memory chips and is home to some of the world’s biggest car companies.

Steel and cement are at risk of becoming major victims of the strike, Land Minister Won Hee-ryong said at a press event on Thursday. About 90% of cement isn’t being trucked from plants run by six companies, which are delaying deliveries until protesters leave the factory gates, according to the Korea Cement Association.

Hyundai has experienced partial production disruptions at its Ulsan plants and is monitoring the situation closely, the company said in an emailed statement. Chosun Ilbo reported earlier on Friday that about 50% of production at Hyundai’s plant is now halted, stopping production of about 2,500 cars a day.

With trucks unavailable, companies are seeking alternative ways to transport goods. At Kia, an affiliate of Hyundai, employees were spotted driving newly produced cars on the streets to warehouses.

At a plant run by metal giant Korea Zinc Co. in Ulsan, several truck drivers on Thursday attempted to disrupt supplies of high-grade sulfate, a key material used for making semiconductors. Police dispersed the truckers in 30 minutes, said a person familiar with the matter, who requested anonymity because of the sensitivity of the issue. A representative for Korea Zinc declined to comment.

The government is trying to ship out emergency exports through cooperation with police, the Land Ministry said in a statement. About 37% of 22,000 union members joined the national strike on Thursday, it said.

The government should remain neutral in labor matters so that companies and labor unions build up their ability to resolve issues, Yoon told reporters on Friday.