The united front Canada showed in the early days of the pandemic has frayed, putting Prime Minister Justin Trudeau in a bind.

A second wave of the coronavirus is engulfing western parts of the country that were largely spared in the spring. The prairie province of Manitoba has seen more new cases per capita in the past seven days than Florida. British Columbia, an early success story, is seeing cases double every 13 days.

In Ontario, the number of hospitalized patients rose 97 per cent in a month and Premier Doug Ford warned Friday that intensive care units could be overrun in December if things don’t change.

Trudeau’s government has control over Canada’s borders, but provinces and local authorities make most of the decisions about closing businesses and schools in the pandemic. They moved in near-lockstep in March and April to contain the first wave -- this time it’s different. Politicians in some regions, including Ontario’s Ford, have been accused of dragging their feet, hoping they can quell the outbreak without striking another hammer blow to the economy.

“We all want this to be over, but it’s not going to be over for many more months. How bad it gets in the coming months depends on all of us,” Trudeau told reporters Friday in Ottawa. “Provinces need to make the right decisions around bringing in rules that will limit close contacts, limit the spread of COVID-19, in places that are appropriate for them.” 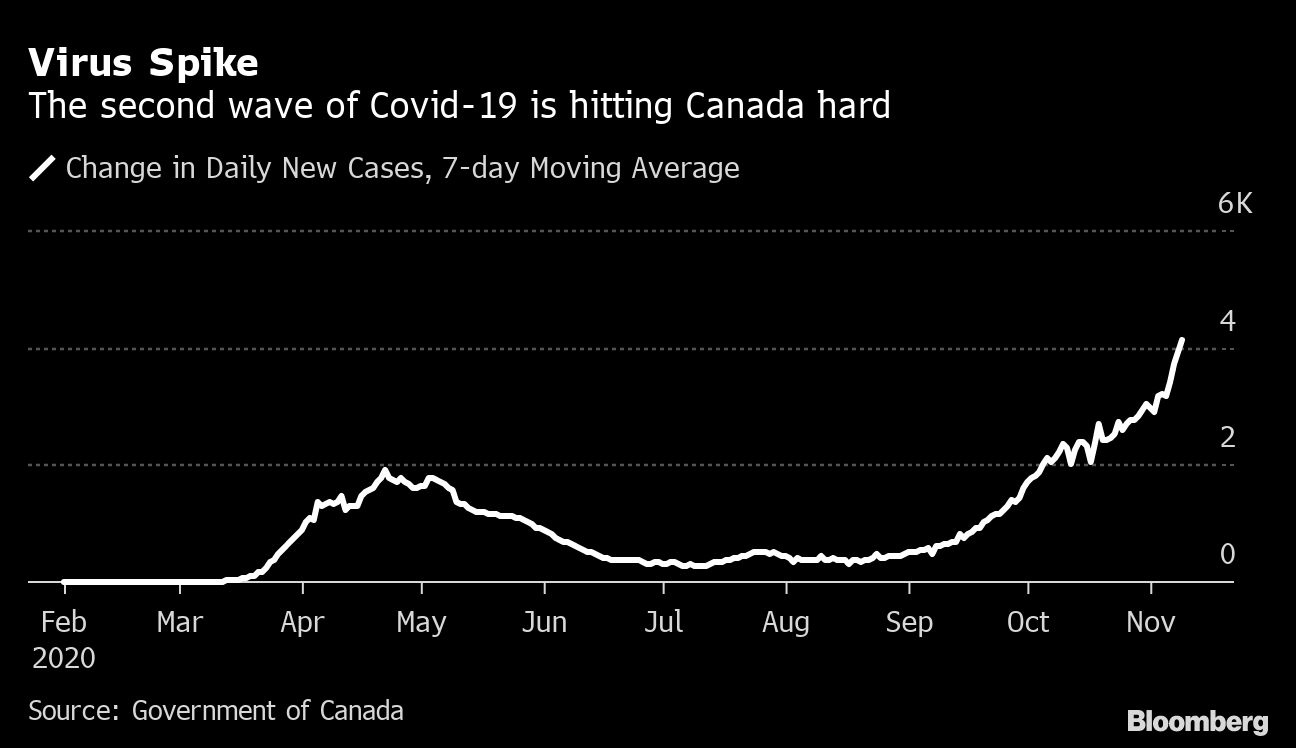 Much of the premiers’ reluctance has to do with the economy. Only about 80 per cent of the jobs lost in March and April have been recovered; as of October, there were still 1.1 million Canadian workers without jobs or working significantly fewer hours because of the pandemic. One of the highest unemployment rates is in oil-rich Alberta, where Premier Jason Kenney has come under public criticism for being slow to clamp down, even as active COVID-19 cases have risen 229 per cent in one month.

“In the last few months there has been this very prevalent feeling ideologically that the economy trumps lives and that we can somehow sacrifice our older population,” said Joe Vipond, an emergency physician at the Rockyview General Hospital in Calgary. “At some point that falls apart, the health care system is overwhelmed and there’s a need to put even longer and heavier lockdowns.”

Health-care professionals wrote to Kenney twice this week to call for action, with one letter suggesting a two-week “sharp lockdown” acting as a “circuit breaker.” Instead he announced a modest tightening of restrictions: Bars and restaurants, for instance, won’t shut down, they will just close earlier. Kenney himself went into self-isolation after being exposed to someone with the virus.

Nowhere has the divide been clearer than in Ontario, which has a population of 14.7 million, more than all but four U.S. states. Ford’s government has moved the goalposts multiple times -- last week releasing new guidelines that appeared to make it easier for businesses to stay open, then reversing course Friday and tightening the rules again.

“We’re staring down the barrel of another lockdown,” the premier said grimly.

The mixed messaging is adding a layer to the problem of pandemic fatigue at a time when the virus has been normalized, said Jessica Mudry, an associate professor in the School of Professional Communication at Ryerson University in Toronto.

“This concept of risk seems to be really lost on people now,” said Mudry, who specializes in public health communication. “People were wiling to be very careful at the beginning and now they are just willing to roll the dice.”

Trudeau’s government has sent billions of dollars to provinces to help pay for the added costs of fighting the pandemic, but he may be losing patience. During a call with premiers Thursday night, “one of the things that I did highlight is that our resources are not infinite at the federal government,” the prime minister said at the news conference Friday. “There is a threshold beyond which when the cases spike too much, we might have to make really difficult choices.”

Trudeau also praised Quebec, where daily cases, which have been the highest in Canada, have been rising at a slower pace. Premier Francois Legault, who closed off restaurants, gyms and other indoor places in Montreal at the start of October, did well to resist the urge to reopen, Trudeau told a local radio station earlier Friday.

Canada needs look no further than east of the country for inspiration. Four provinces known as the “Atlantic Bubble” have largely contained the virus by closing off their border to most travelers, including other Canadians, and reopening slowly from the first lockdown to protect their aging population of 2.4 million. The COVID-19 death rate there is just 3 per 100,000 people, compared to 74 in the U.S., and many businesses have remained open, though tourism has taken a hit.