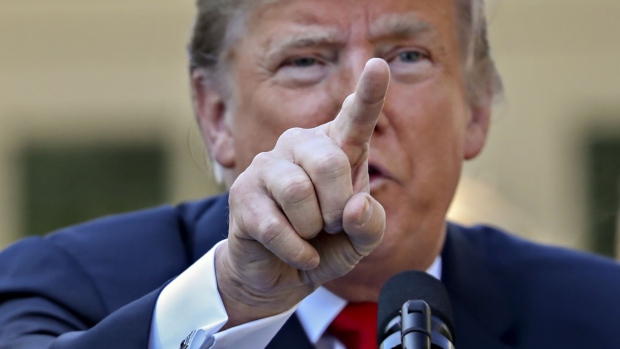 U.S. President Donald Trump speaks on the U.S.-Mexico-Canada Agreement, or USMCA, in the Rose Garden of the White House in Washington, D.C., U.S., on Monday, Oct. 1, 2018. , Photographer: Andrew Harrer/Bloomberg

President Donald Trump blasted the U.S. Supreme Court over a pair of rulings involving his financial records, depicting himself as the victim of a double standard that isn’t applied to his political enemies.

“This is all a political prosecution,” Trump said Thursday on Twitter, where he repeated his attacks on Special Counsel Robert Mueller’s Russia investigation. “I won the Mueller Witch Hunt, and others, and now I have to keep fighting in a politically corrupt New York. Not fair to this Presidency or Administration!”

The Supreme Court allowed a New York grand jury to obtain the president’s financial records, while blocking for now House subpoenas that could have resulted in their release before the November election.

Trump lamented that judges have given deference to past presidents, but accused the court of singling him out for political reasons.

“We have a totally corrupt previous Administration, including a President and Vice President who spied on my campaign, AND GOT CAIGHT...and nothing happens to them,” he tweeted. “Now the Supreme Court gives a delay ruling that they would never have given.......for another President.”

“No Republican Senate Judiciary response, NO ‘JUSTICE’, NO FBI, NO NOTHING,” Trump wrote.