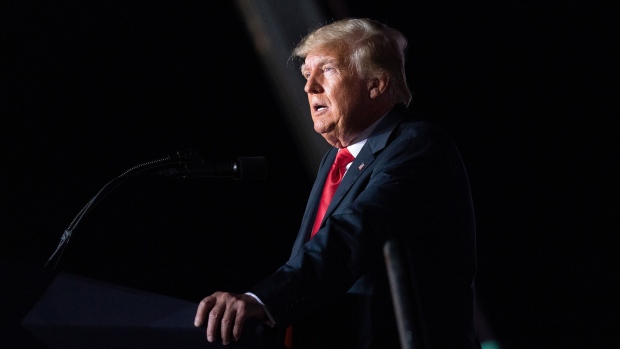 (Bloomberg) -- Former President Donald Trump teased the possibility that he would campaign for Glenn Youngkin’s Virginia gubernatorial campaign, less than 24 hours after President Joe Biden sought to tether the two at a rally for Democrat Terry McAuliffe.

“Chanting, ‘We love Trump’ in Arlington, Va. Thank you, Arlington, see you soon!” Trump said in a statement issued on Wednesday.

Youngkin has walked a fine line regarding Trump throughout his Republican campaign in a state that Biden won in 2020 by 10 points. He has accepted Trump’s multiple endorsements of him and speaks well of him in conservative areas of the state. But in swing or liberal sections of Virginia, Youngkin says he’s running his own campaign and avoids comparisons to the former president.

Youngkin’s campaign did not immediately respond to a request for comment about Trump’s statement. McAullife hailed Trump’s renewed endorsement and potential visit, saying in a statement that “it could not be more clear: Trump is Youngkin’s top endorser and surrogate.”

McAuliffe argues that Youngkin is a carbon copy of Trump. The former Virginia governor has called in his party’s biggest names including Biden, former President Barack Obama and Vice President Kamala Harris to help him in a closer-than-expected race. Trump hasn’t campaigned in person with Youngkin, who has said he hasn’t invited Trump.

Democrats have been trying to goad Trump into campaigning for Youngkin before the Nov. 2 election. McAuliffe is tied in polls with Youngkin, a former co-CEO of Carlyle Group Inc., after holding a consistent lead earlier in the election.

“Terry’s opponent has made all of his private pledges of loyalty to Donald Trump,” Biden said in his speech Tuesday in Arlington. “But what’s really interesting to me: He won’t stand next to Donald Trump now that the campaign is on.”

“He won’t allow Donald Trump to campaign for him in this state,” Biden said. “And he’s willing to pledge his loyalty to Trump in private, why not in public? What’s he trying to hide? Is there a problem with Trump being here? Is he embarrassed?”

The Democratic National Committee also flew a plane near Trump’s Mar-a-Lago resort in Florida earlier this month with a banner that read, “Why won’t Youngkin let Trump campaign in VA?”