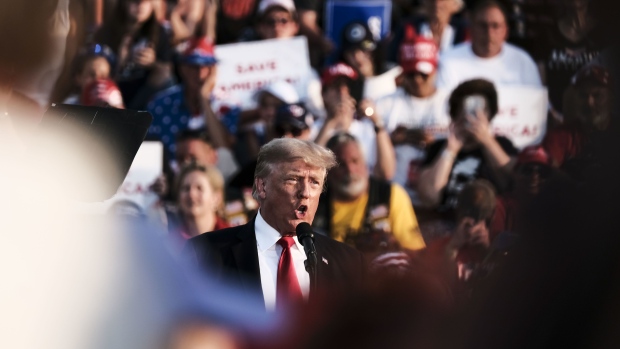 Donald Trump speaks during a 'Save America' Rally at the Lorain County Fairgrounds in Wellington, Ohio, on June 26. , Bloomberg

(Bloomberg) -- Donald Trump’s fundraising committee has hired two political operatives familiar with campaigns in Iowa, the state that typically kicks off the race for the White House, signaling his interest in running in 2024.

An aide with Save America, the leadership political action committee that Trump began after losing the 2020 election, told staff and advisers in a memo Thursday that Eric Branstad and Alex Latcham are joining as senior advisers.

A Save America spokesman, Taylor Budowich, confirmed the hires and said Latcham and Branstad will help on “many political matters.”

Trump has been hinting about another presidential bid, even as he has tried to steer clear of activities that would trigger federal election laws that would require him to register as a candidate -- and limit spending. Some Republicans had been hoping that Trump would fade away, as he continues to falsely claim him won last year’s election.

“We are going to make you very happy,” Trump said in May on “The Dan Bongino Show” when asked about his 2024 plans. “And we’re going to do what’s right.”

Trump has spent most of his time since President Joe Biden was inaugurated at his homes in Florida and New Jersey. But he has recently begun to move to prevent other potential 2024 GOP candidates from gaining traction.

This summer, Trump has traveled to Ohio, Florida and Arizon to hold rallies, which he uses to raise money and gain voter information. He has another scheduled in Alabama later this month.

The news of Trump’s taking steps in Iowa politics comes as Biden is buffeted by inflation worries, the resurgence of Covid-19 cases and the Taliban sweeping through Afghanistan.

The chairman of the Republican Party of Iowa, Jeff Kaufmann, tweeted that Trump called him Sunday, and “asked about Iowa’s farmers and other topics including Iowa’s first-in-the-nation status.”

Other potential GOP contenders include former Vice President Mike Pence, Ambassador to the United Nations Nikki Haley and Secretary of State Mike Pompeo. Florida Governor Ron DeSantis and U.S. Senator Tom Cotton of Arkansas also may run. All but DeSantis have made Iowa stops since the 2020 election.

Both Latcham and Branstad are Iowa natives with deep experience in the caucuses that have led off the presidential nominating contests. Latcham was Trump’s Iowa political director during the 2016 general election campaign then was deputy political director in the Trump White House.

Branstad was Trump’s state director in Iowa in 2016, then a senior White House adviser at the Commerce Department. During the 2020 Trump re-election campaign, Branstad was senior advisor in Iowa. He is the son of former Iowa Governor Terry Branstad, Trump’s U.S. ambassador to China.