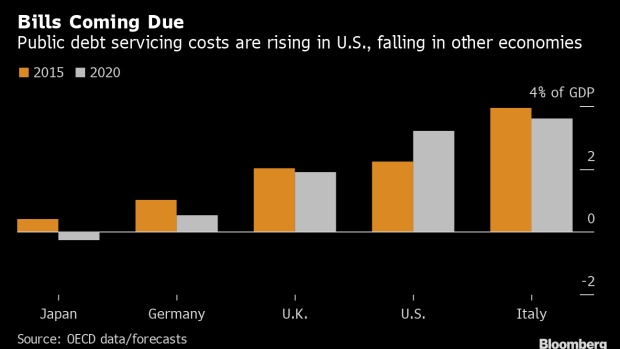 (Bloomberg) -- President Donald Trump triggered a swift and skeptical reaction with his demand Wednesday for the Federal Reserve to lower interest rates "to zero, or less," as part of a plan to reduce the financing costs of U.S. government debt.

“This is a recipe for disaster,” said Roberto Perli, a former Fed economist and partner at Cornerstone Macro in Washington. “If a central bank starts financing debt spending without constraints, interest rates will end up being anything but moderate. Just look at Zimbabwe.”

Independent central banks like the Fed don’t set rates motivated by an urge to manage their national budget’s debt financing costs. They adjust the cost of borrowing based on what they judge will be best for the overall economy. In the U.S., the Fed has to pursue that through specific goals set by Congress: maximizing employment and containing inflation.

To be sure, interest costs represent a meaningful portion of the U.S. federal budget and are projected to rise at a worrying pace. Lower rates would ease that burden. It’s also a fair question to ask why the U.S., the safest haven for investors worldwide, should be paying higher rates than countries like Japan and even Greece.

“The Federal Reserve should get our interest rates down to ZERO, or less, and we should then start to refinance our debt,” Trump tweeted. “Interest cost could be brought way down, while at the same time substantially lengthening the term.”

The president is calling for the Fed to suddenly lower its benchmark rate by 2 full percentage points to zero at a time when unemployment is near a 50-year low and growth, while slowing, is still doing OK.

“If the Fed were to actually do that, markets would have to wonder if the world was much worse than we thought,” said Diane Swonk, chief economist at Grant Thornton in Chicago. “That could precipitate a recession.”

It might be great for a while to lower government financing costs. But if that means setting rates too low for too long, the results can be disastrous, producing financial bubbles and high inflation.

Trump’s proposal, though, is not unprecedented.

During World War II the Fed agreed, at the request of the Treasury, to hold rates artificially low to help the government take on massive amounts of debt in the war effort. But it was accompanied by an equally prodigious expansion of government-financed industrial output.

A government, especially the U.S. government, can’t refinance its debt the way a household or company can by simply taking out a new loan to pay off all its old borrowing. The U.S. Treasury owes more than $16 trillion in outstanding debt, and is refinancing a portion of that all the time as Treasury bills, notes and bonds mature. It holds weekly auctions of short-term bills and replaces large portions of longer-term debt each quarter.

Even if rates were to fall precipitously, it would be difficult and probably unduly expensive for the Treasury to accelerate that process by going out and purchasing older but yet-to-mature government debt in the secondary market in order to replace it with new issues. Some of those older issues are trading at prices as high as $1.40 for every $1 of face value.

Recently, with rates falling again, the Treasury has begun exploring the idea of issuing very long-term debt -- 50 and 100-year bonds -- to lock in today’s low rates for long periods. But forcing more debt into ever-longer maturities might press the government to pay more to investors who otherwise lack the appetite for those securities.

Careful What You Wish For

On one level, it is head scratching why the U.S. should be paying more to borrow money than smaller, weaker and riskier countries. If all else were equal, investors should receive a premium for lending to those countries instead of handing their money over to Uncle Sam. But not all else is equal.

Longer-term sovereign bonds yields incorporate investor expectations for longer-term growth and inflation. So, the negative yields found in the Europe and Japan are a reflection of a very poor economic outlook.

From that perspective, the fact that the U.S. Treasury isn’t able to borrow money for nothing signals America’s relative economic strength.

To contact the editors responsible for this story: Alister Bull at abull7@bloomberg.net, Margaret Collins