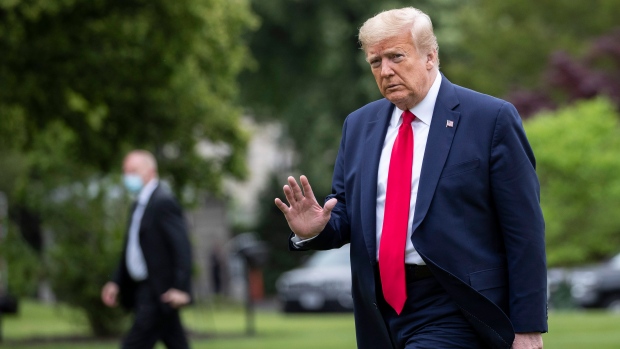 President Donald Trump waves as he walks across the South Lawn of the White House on Marine One, Sunday, May 17, 2020, in Washington. , The Associated Press

Donald Trump said he may reschedule a meeting of the Group of Seven nations to take place at the presidential retreat at Camp David, Maryland, after having canceled the in-person gathering due to the coronavirus pandemic.

“Now that our Country is ‘Transitioning back to Greatness’, I am considering rescheduling the G7, on the same or similar date, in Washington, D.C., at the legendary Camp David. The other members are also beginning their COMEBACK. It would be a great sign to all - normalization!” Trump said Wednesday in a tweet

Now that our Country is “Transitioning back to Greatness”, I am considering rescheduling the G-7, on the same or similar date, in Washington, D.C., at the legendary Camp David. The other members are also beginning their COMEBACK. It would be a great sign to all - normalization!

The event, originally scheduled for June, was set to take place at Camp David, but the U.S. in March said it would instead be held by video conference because of the coronavirus pandemic.

G7 leaders were non-committal after hearing Trump’s suggestion that they convene after all.

Trump has been urging the U.S. to reopen businesses and get the economy back on track. Some other G7 nations have already begun that process, as well.

But the president’s message came a day after United Nations Secretary-General Antonio Guterres signaled a more cautious approach to gathering world leaders. Guterres, in a letter to the president of the UN General Assembly, called for a scaled-down gathering in New York this fall, saying it is “highly unlikely that heads of state and government from all member states will be able to travel to New York in September,” due to the ongoing pandemic.

It’s unclear whether leaders from the G7 countries -- which includes Germany, France, Italy, Canada, Japan and the U.K. -- would be willing to attend a Camp David meeting. Canadian Prime Minister Justin Trudeau said it was too early to judge Trump’s suggestion.

“We need to keep meeting as leaders,” Trudeau told reporters in Ottawa. “Whether that’s virtual or in person, we’ll certainly take a look at what the U.S. is proposing as hosts of the G7 to see what kind of measures will be in place to keep people safe, what kind of recommendations the experts are giving in terms of how that might function.”

And highlighting an area of disagreement with the U.S. leader, Merkel added: “Whether as a video conference or in another form, I will definitely fight for multilateralism. That’s absolutely clear, at the G7 and also at the G-20.”

President Emmanuel Macron of France is willing to go to Camp David if sanitary conditions allow for the meeting to be safe, an Elysee official said. The G7 is an important institution for the French president, and important to solving the COVID-19 crisis, the official said.