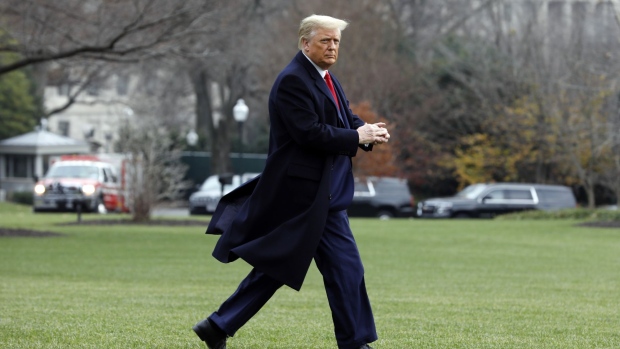 President Donald Trump boarding Marine One on the South Lawn of the White House. , Bloomberg

(Bloomberg) -- President Donald Trump on Friday signed legislation that could kick Chinese companies off of U.S. exchanges unless American regulators can review their financial audits, a move likely to further escalate tensions between the two countries.

The measure, which could affect corporate giants like Alibaba Group Holding Ltd. and Baidu Inc., serves as another parting shot at Beijing before Trump leaves office in January.

The president has long railed against China for what he calls unfair trading practices, and slapped tariffs on billions of dollars in imports. But his rhetoric sharpened this year as he blamed Beijing for the global coronavirus pandemic -- a central issue in his electoral loss to Joe Biden as Trump was widely criticized for his handling of the outbreak.

The de-listing law won bipartisan support in the House early this month after easily clearing the U.S. Senate in May. While it applies to any foreign company, the bill’s sponsors have said their goal was to target China.

Chinese firms for years have used American capital markets and dollar-based finance as a key funding component to grow their businesses. While the measure includes a phase-in period, with penalties kicking in after three straight years of noncompliance, it could impose real damage on Chinese companies that fail to meet the audit standards.

“U.S. policy is letting China flout rules that American companies play by, and it’s dangerous,” Republican Senator John Kennedy of Louisiana, a lead sponsor of the new law, said in a statement.

Foreign Ministry spokeswoman Hua Chunying told reporters in Beijing after passage of the House bill that China was “against politicizing securities regulation” and urged cooperation to protect investors’ rights.

Trump’s signing of the law capped a flurry of recent steps against China, including guidelines that would limit travel visas for 92 million Communist Party members. Any of them with a 10-year visa would now see it reduced to one month.

The U.S. Department of Homeland Security has said that customs officers at American ports would impound “shipments containing cotton and cotton products originating from” the Xinjiang Production and Construction Corps., a military-affiliated entity that’s one of China’s largest producers. This follows earlier U.S. action against the company that bars it from making any transaction with American companies and citizens.

The new law marks a watershed moment in a long-running dispute over China’s refusal to let the Public Company Accounting Oversight Board examine audits of firms whose shares trade in the U.S. The requirement for the inspections by the agency, which was created in the wake of the Enron Corp. accounting scandal, is meant to prevent fraud and wrongdoing that could wipe out shareholders.

In addition to requiring companies to allow U.S. inspectors to review their financial audits, the measure -- introduced by Kennedy and Senator Chris Van Hollen, a Maryland Democrat -- requires firms to disclose whether they are under government control.

Van Hollen said in a statement that the delisting bill would protect people who “have been cheated out of their money after investing in seemingly legitimate Chinese companies that are not held to the same standards” as other public companies. “This bill rights that wrong, ensuring that all companies on the U.S. exchanges abide by the same rules,” he said.