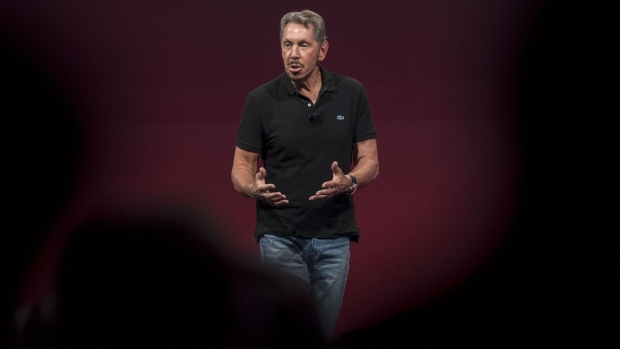 Larry Ellison, chairman and co-founder of Oracle Corp., speaks during the Oracle OpenWorld 2017 conference in San Francisco, California, U.S., on Sunday, Oct. 1, 2017. OpenWorld is a business and technology conference that delivers insight into industry trends and breakthroughs in Cloud technology, hosting educational sessions as well as exhibitions from over 400 partners. , Bloomberg

(Bloomberg) -- President Donald Trump, nearing a decision on whether to approve an alliance between Oracle Corp. and the Chinese-owned video app TikTok, spoke by phone Friday with Oracle’s chairman, Larry Ellison, according to people familiar with the matter.

Trump set a deadline of Sunday to approve or decline a deal in which Oracle and a Chinese company, Bytedance Ltd., would create a new company, TikTok Global, in order to satisfy U.S. national security concerns about the popular app.

The chief executive of Walmart Inc., Doug McMillon, was also on the call, the people said. Walmart, which had previously partnered with Microsoft Corp. to make an outright bid for TikTok’s U.S. business, remains interested in investing as well, and could end up with a seat on the board of the new company, according to one of the people.

The people asked not to be identified because the conversations were private.

Separately, Democratic nominee Joe Biden assailed Trump for the timing of his interest in the app.

“It’s a matter of genuine concern that TikTok, a Chinese operation, has access to over 100 million young people, particularly in the United States of America,” Biden told reporters in Duluth, Minnesota on Friday.

“What I always worry about though, is what Trump does and the way he does it on the eve of an election,” he said. “All of a sudden he’s decided he’s going to deal with TikTok, and he’s talking about how we have to make money off of it. I mean what the hell is he talking about. Either it is a security risk or isn’t a security risk.”

Earlier Friday, the Trump administration announced that it was banning TikTok, as well another Chinese platform, WeChat, from U.S. mobile app stores. Trump has said the companies threaten national security because China could use them to mine user data or broadcast propaganda.