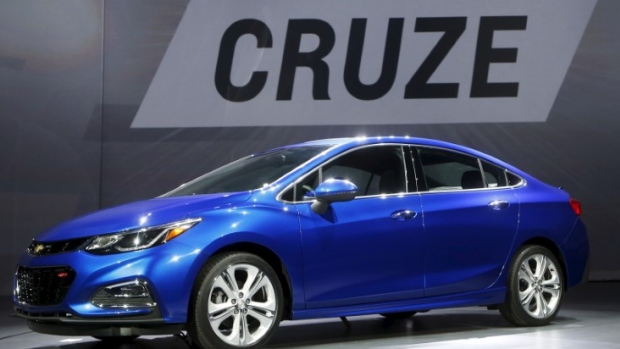 DETROIT/WASHINGTON - President-elect Donald Trump on Tuesday threatened to impose a "big border tax" on General Motors Co (GM.N) for making some of its Chevrolet Cruze compact cars in Mexico, an arrangement the largest U.S. automaker defended as part of its strategy to serve global customers, not sell them in the United States.

Trump's comments marked his latest broadside aimed at an American company over jobs, imports and costs before he takes office on Jan. 20, signaling an uncommon degree of intervention for an incoming U.S. president into corporate affairs.

"General Motors is sending Mexican made model of Chevy Cruze to U.S. car dealers-tax free across border. Make in U.S.A. or pay big border tax!" Trump said in a post on Twitter.

Trump did not provide further details but previously vowed to hit companies that shift production from America to other countries with a 35 per cent tax on their exports into the United States. He also has denounced the North American Free Trade Agreement between the United States, Mexico and Canada.

Trump's tweet came hours before GM's rival Ford Motor Co (F.N) announced it would cancel a planned US$1.6 billion factory in Mexico and would invest US$700 million at a Michigan factory, after it also came under criticism from the Republican president-elect for its Mexican investment plans. Ford's executive chairman, Bill Ford Jr., said he personally notified Trump of the decision, but after Trump's early-morning GM tweet.

"GM builds the Chevrolet Cruze hatchback for global markets in Mexico, with a small number sold in the U.S." it said in a statement posed on its website.

The Cruze is one of GM's best-selling cars, although its sales numbers were down significantly in 2016.

Shares of GM rose 1 percent to $35.19 after falling about 1 per cent following Trump's tweet before the market opened.

"In this case, the tweet was specific to General Motors. But I think you've seen an overall philosophy during the campaign and since he was elected to stand up for American workers and make sure that American companies don't benefit from moving their companies overseas and leaving American workers behind," Trump transition team spokesman Sean Spicer said.

Last month, Trump announced the formation of a council to advise him on job creation comprised of leaders from a variety of major U.S. corporations including GM Chief Executive Officer Mary Barra.

GM said in 2015 it would build its next-generation Chevrolet Cruze compact in Mexico as automakers look to expand in the Latin American nation to take advantage of low labor costs and free trade agreements. The company said in 2015 it would invest US$350 million to produce the Cruze at its plant in Coahuila as part of the $5 billion investment in its Mexican plants announced in 2014, creating 5,600 jobs.

GM said last year it would import some Cruze cars from Mexico.

Trump, a Republican who will succeed Democratic President Barack Obama, campaigned for president using tough rhetoric on trade and promises to protect American workers, and targeted several companies by name.

According to Automotive News, GM began producing the Cruze in Mexico last year, making 52,631 cars there. In comparison, it built 319,536 of them in the United States. Previous versions of the Cruze sold in Mexico were made in a GM South Korea plant, it reported.

The shift is part of a larger trend among Detroit's Big Three automakers to produce more small cars for the North American market in Mexico in an effort to lower labor costs, while using higher-paid U.S. workers to build more profitable trucks, sport utility vehicles and luxury cars.

In November, GM said it planned in early 2017 to lay off 2,000 employees at two U.S. auto plants, including the one in Lordstown. U.S. small car sales have been hurt by lagging consumer demand and low gas prices. GM's U.S. Cruze sales were down 18 per cent through November.