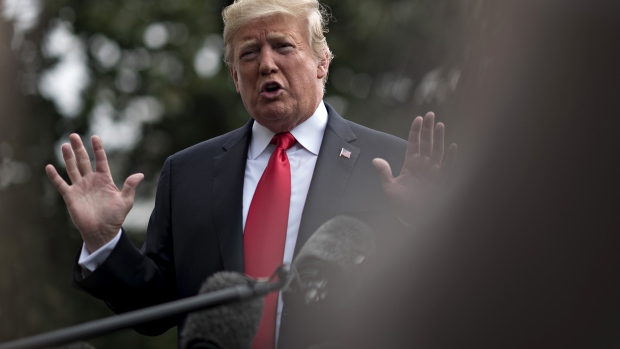 (Bloomberg) -- President Donald Trump threatened long jail terms over what he’s called politically motivated "spying" on his 2016 campaign, despite testimony from his own FBI director that he wasn’t aware of any improper surveillance.

“My Campaign for President was conclusively spied on. Nothing like this has ever happened in American Politics,” Trump said Friday on Twitter. “A really bad situation. TREASON means long jail sentences, and this was TREASON!”

Trump has said he’s in favor of Attorney General William Barr’s decision to investigate the origins of Special Counsel Robert Mueller’s probe into Russian interference in the 2016 election. Trump denied that he ordered Barr to launch the investigation, though he has repeatedly encouraged it in public remarks.

Trump has insisted that the Russia investigation was politically motivated and concocted from false allegations to spy on his campaign and ultimately undermine his presidency.

But FBI Director Christopher Wray testified before a Senate panel last week that he wasn’t aware of any improper spying, a comment Trump said he found “ridiculous.”

“That’s not the term I would use,” told senators when asked about whether there there was spying.

To contact the reporter on this story: Terrence Dopp in Washington at tdopp@bloomberg.net

To contact the editors responsible for this story: Kasia Klimasinska at kklimasinska@bloomberg.net, Elizabeth Wasserman, Kathleen Hunter