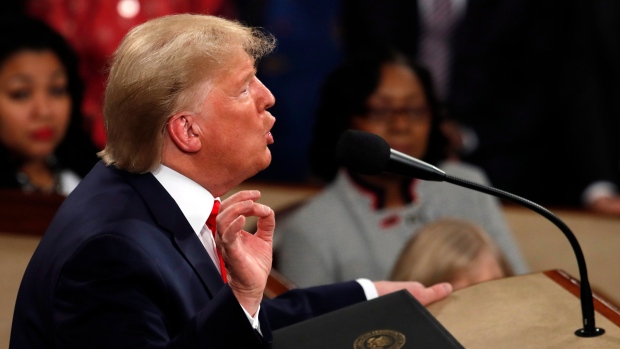 President Donald Trump delivers his State of the Union address to a joint session of Congress on Capitol Hill in Washington, Tuesday, Feb. 4, 2020. , The Canadian Press

Donald Trump said he is building “the world’s most prosperous and inclusive society” in a triumphant State of The Union address delivered on the eve of his likely acquittal in the Senate’s impeachment trial and as he reached the highest public approval of his presidency.

Trump laid out his argument for re-election, centered on the strength of the U.S. economy and what he called the “great American comeback” during his first term in office.

“In just three short years, we have shattered the mentality of American decline and we have rejected the downsizing of America’s destiny,” Trump said Tuesday from the House chamber. “We are moving forward at a pace that was unimaginable just a short time ago, and we are never going back.”

Trump primarily sought to cast himself as the architect of an economy that has led to a streak of low unemployment. The president will also appeal to working-class voters who helped elect him in 2016 by saying the benefits of his economic policies are widespread, countering criticism that they have primarily benefited the wealthy.

“Every citizen can join in America’s unparalleled success,” Trump said. “Every community can take part in America’s extraordinary rise.”

The U.S. is in fact one of the most unequal nations among its peers, with a growing share of wealth accrued to the top of the income-ladder. That’s left not only the poorest, but also the middle class behind. A Census Bureau report last year found that income inequality in the U.S. had widened “significantly” in 2018.

Ahead of his speech, Trump was greeted by good news when Gallup said his approval rating had reached 49 per cent among registered U.S. voters -- a high-water mark for his presidency. But the polling firm found 50 per cent of voters still disapprove of him, as well as a yawning divide between Republican and Democratic support. Trump enjoys 94 per cent approval within his own party but just 7  among the opposition, the largest such difference Gallup has ever recorded, it said.

Venezuelan opposition leader Juan Guaido attended the speech as a guest of the White House, providing a high-profile platform for the National Assembly leader as he seeks to revive support for his bid to oust President Nicolas Maduro. In the speech, Trump referred to Guaido as “the true and legitimate president of Venezuela.”

Conservative radio host Rush Limbaugh, who recently announced he’s suffering from lung cancer, was also in the audience. Trump announced that he would give the commentator the Presidential Medal of Freedom, and first lady Melania Trump hung the medal around his neck.

The chamber provided a dramatic stage for nation’s leaders, who have been bitterly divided in a partisan fight over Trump’s impeachment. Vice President Mike Pence stood side-by-side with House Speaker Nancy Pelosi in the center of the room, though the two appeared to ignore each other.

Partisanship was evident. Before Trump’s speech began, Pelosi extended her hand to Trump but he turned away without shaking it. Republicans applauded the president and chanted, “Four more years!” as Democrats were silent.

On Wednesday, the GOP-led Senate is expected to acquit Trump of articles of impeachment brought by the Democratic-controlled House after he sought to pressure Ukraine’s government to investigate political rivals.

As Trump spoke, Democrats were grappling with the botched Iowa caucuses to determine who will challenge Trump on the ballot in November. The president used his address to criticize Democrat proposals to expand Medicare to all Americans.

Trump also made an “ironclad pledge” to protect patients with pre-existing health conditions. The president has previously claimed to have saved insurance for people with pre-existing conditions, though the protections were in place from former President Barack Obama’s Affordable Care Act, a law he has been trying to dismantle.

Trump also highlighted his administration’s efforts to cut regulations, particularly environmental rules that had restricted oil and gas development. He touted recent trade deals, including his “phase one” China deal, and a renegotiated pact with Canada and Mexico.

While his China deal has eased investor concern and likely warded off new Trump tariffs, it’s narrower in scope than first envisioned and has hit American farmers heavily. In turn, Trump has shoveled US$28 billion in one-time aid to farmers to make up for the trade war. That’s more than twice the cost of the auto industry bailout engineered in the Great Recession a decade ago.

Trump’s new continental trade deal is the U.S.-Mexico-Canada-Agreement, a fundamentally modest rewrite of the North American Free Trade Agreement. It will eventually boost U.S. economic output by 0.35 per cent, and raise U.S. employment by about 0.12 per cent, according to an April 2019 analysis by the nonpartisan United States International Trade Commission. An International Monetary Fund working paper analyzed five of the deal’s key provisions and found only a “negligible” effect on GDP.

Trump’s next trade target is Europe, where he hopes to strike a new deal both with the European Union and the United Kingdom, fresh off of Brexit. Trump has threatened tariffs on German cars and French wine, while campaigning against a French tax on digital companies and regularly complaining that Europe doesn’t pull its weight in NATO or on foreign aid, including to Ukraine.

The U.K., France and Germany are also working to hold together the Iran nuclear deal, which Trump quit. He’s urged them to quit, too, and his China talks have shown how regional tensions can get dragged onto the negotiating table. Trump has said he wants an EU deal before the election.

Trump’s running on the economy, and Tuesday’s speech made that clear, though there are warning signs. He echoed campaign speeches by citing the low unemployment figures, but job gains slowed in December as wages rose at the weakest annual pace since 2018. The Federal Reserve has cut interest rates three times to respond to weakness, and Trump has urged more cuts. Trump has also cited the economy as a defense in the ongoing impeachment trial, arguing that it’s wrong to impeach a president during a time of growth.

Trump has courted black voters as part of his re-election bid, hailing unemployment rates. There are signs, however, that it remains an uphill battle. A Washington Post-Ipsos poll last month of 1,088 black adults found that 83 per cent said Trump is a racist, and the same share said he’s made racism worse in the country. It found a job approval rating of 7 per cent.

In his State of the Union speech, Trump singled out a black family from Philadelphia who have sought to move their daughter from what the White House called “low-performing” public schools and a black man the White House said benefited from the “Opportunity Zone” investment program created by his 2017 tax overhaul.

Trump also recognized 100-year-old Charles McGee, one of the last surviving Tuskegee Airmen, the first black military aviators to serve in the U.S. armed forces; the president said he pinned stars on McGee’s shoulders earlier in the day marking his promotion to brigadier general.

Trump has also tried to appeal to Latino voters, skirting divisive rhetoric he’s otherwise aimed at migrants crossing into the U.S. from Mexico. In his speech, he described record low unemployment among Hispanics. The Pew Research Center projects Latinos will surpass African-Americans in number of eligible voters in the 2020 election.