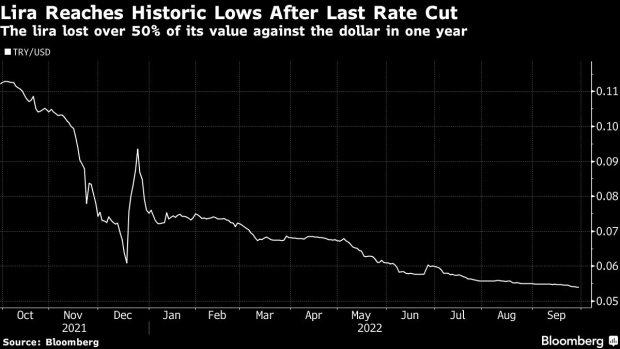 A Turkish national flag hangs at a souvenir store inside the spice bazaar in the Eminonu district of Istanbul, Turkey, on Tuesday, Sept. 20, 2022. Key Turkish banks are buying back shares after stocks reversed an unprecedented rally last week, providing relief for brokerages hit by the rout. Photographer: Erhan Demirtas/Bloomberg , Bloomberg

(Bloomberg) -- Fueled by an experimental central bank policy that has chased away foreign investors and eroded the lira’s value, Turkish inflation likely accelerated last month to a level last seen in mid-1998.

Annual inflation probably rose to 83.5% in September, climbing for a 16th month, according to the median estimate in a Bloomberg survey. The jump comes after central bank Governor Sahap Kavcioglu embarked on a series of interest-rate cuts this year, making Turkey an outlier among global monetary authorities, most of which are aggressively tightening to control price increases.

Turkey’s central bank said in its latest forecast in July that inflation should peak somewhere between 80% and 90% by October. The government estimates that it’ll slow to 65% at the end of this year.

But President Recep Tayyip Erdogan has insisted on even lower interest rates, saying they’ll help reduce inflation, an argument that contradicts conventional economic theory -- and which, so far, hasn’t been validated by real-world experience, least of all in Turkey. He’s called for the benchmark rate to be cut to below 10% by year-end, from 12% currently.

Turkish officials reject criticism that rampant price increases are a result of monetary policy errors, instead blaming Russia’s invasion of Ukraine for a global rally in commodities including energy and food. Yet even when the impact from such volatile items is excluded, annual Turkish inflation stood at over 66% as of August, according to a core price index published by state statistics agency TurkStat.

“Price gains are high, broad-based and likely to be persistent. Items with triple-digit inflation accounted for 25% of the consumer basket. Recent and forthcoming interest-rate cuts will likely result in even higher inflation in the coming months.”

The experimental policies have already pushed inflation above 100% in parts of the country. Consumer prices in Istanbul, Turkey’s most populous city, more than doubled from a year earlier, according to a retail price index compiled by the Istanbul Chamber of Commerce and released on Saturday, before the national data on Monday.

A breakdown of the Istanbul data showed the cost of everything from rent to food rose sharply last month. Attempting to ease the pain for lower-income Turks ahead of elections scheduled for next June, the government has raised the national minimum wage twice in a year.

Kavcioglu has delivered cuts, as sought by Erdogan, at the last two rate-setting meetings, slashing the benchmark by 100 basis points each time. That’s left Turkey with the world’s deepest negative interest rates when adjusted for inflation, while the lira has lost more than 50% of its value against the dollar in the past 12 months.

The central bank will hold its next rate-setting meeting on Oct. 20, and publish its fourth inflation report of the year a week later.