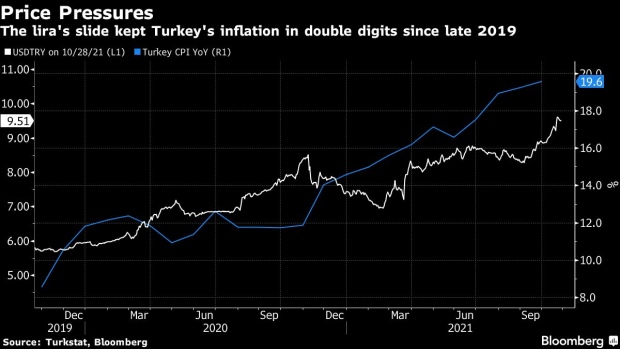 (Bloomberg) -- Turkey’s central bank raised its inflation projections for the end of this year with the lira trading just shy of record lows after rate-cut selloffs.

Consumer-price growth will finish the year at 18.4%, compared with a previous forecast of 14.1%, Governor Sahap Kavcioglu said Thursday as he unveiled the last 2021 inflation report.

Below are some highlights from his presentation:

Two consecutive surprise rate cuts since September carried the lira’s year-to-date depreciation against the dollar to over 20%, the worst among all major currencies tracked by Bloomberg, adding to inflationary pressures.

Under pressure from President Recep Tayyip Erdogan’s opposition to high interest rates, the central bank cut the benchmark by 200 basis points to 16% last week, twice what markets expected. It hinted that further reductions might follow this year.

Erdogan champions the unconventional hypothesis that lower rates will slow inflation. Kavcioglu, who replaced hawkish Naci Agbal after he was fired in March, kept borrowing costs unchanged until a surprise, 100-basis-point-cut in September.

The statistics agency will publish October inflation data on Nov. 3.