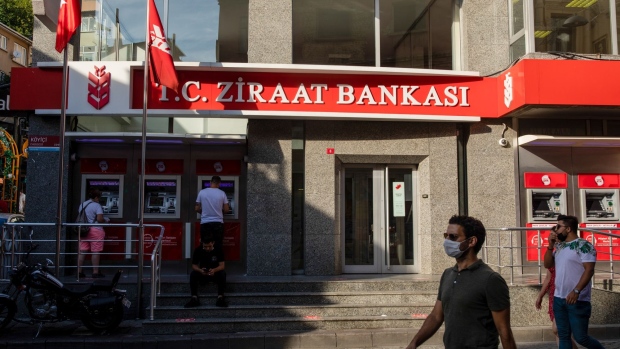 Pedestrians pass a bank branch of TC Ziraat Bankasi AS in Istanbul, Turkey, on Thursday, Aug. 27, 2020. Economic activity fell faster and deeper in emerging markets than in advanced economies as the Covid-19 shock hit, and the recovery is proving slower and shallower. , Bloomberg

(Bloomberg) -- Turkey plans to inject 51.5 billion liras ($3.8 billion) into state banks to ensure they keep lending to businesses after the lira’s record drop eroded their buffers.

Turkey’s sovereign wealth fund will boost core capital of TC Ziraat Bankasi AS, Turkiye Halk Bankasi AS and Turkiye Vakiflar Bankasi TAO as well as their Islamic banking affiliates, a senior official with direct knowledge of the matter said, asking not to be identified as the decision has yet to be announced.

The lira’s decline and an effort by state banks to keep the cost of loans low since the Covid-19 pandemic have eroded their cash buffers, requiring the government to inject capital for the third time in about three years.

Turkiye Varlik Fonu, the wealth fund also known as TWF, holds a majority stake in all three state lenders. It injected $6.7 billion to support banks in two separate rounds in 2019 and 2020.

The fund financed previous cash injection via bond sales by the Treasury and Finance Ministry to banks in the local market.

Despite the injections, the average capital adequacy ratio of state-owned banks fell to 16% at the end of November from 18% at the end of 2019, according to the latest data from the banking watchdog.

A representative of Ziraat Bank declined to comment. Representatives of Halkbank and Vakifbank didn’t respond to calls and text messages seeking comment. A TWF representative said the fund will continue to support banks as it’s done in the past.