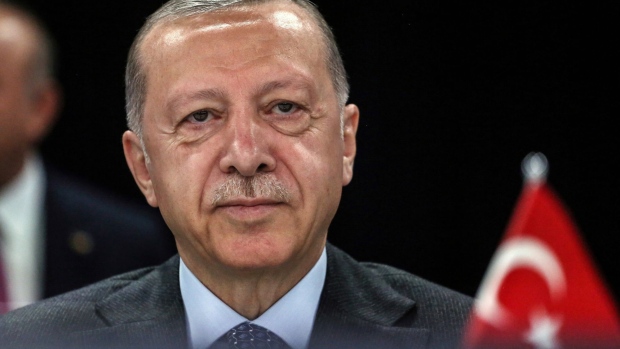 Recep Tayyip Erdogan, Turkey's president, at a meeting on the final day of the North Atlantic Treaty Organization (NATO) summit at the Ifema Congress Center in Madrid, Spain, on Thursday, June 30, 2022. NATO's so-called Strategic Concept said in the text that China's stated ambitions and coercive policies "challenge our interests, security and values" and warned about a deepening strategic partnership between Beijing and Moscow. , Bloomberg

“Greece’s occupation of Aegean Sea islands is not our concern,” Erdogan said in a speech Saturday in Samsun province on the Black Sea coast. “When the time comes, we will do what is necessary. As we say, all of a sudden, we can come overnight.”

The Turkish government is irked by what it sees as a growing Greek military buildup on islands near its coast, Western military support to Greece, and a growing US military footprint in Greek border towns. Turkey also has accused Greek fighter jets of locking radar-targeting systems on Turkish fighters that it says were in international airspace.

Greece won’t follow Turkey in its daily threats and it will immediately inform “our allies and partners of the content of the provocative statements of the last few days,” the Foreign Ministry in Athens said in a statement late Saturday. Greece’s goal is to make it clear which side is threatening NATO’s cohesion, according to the statement.

Tension between the two neighbors increased this week after Greece lodged a complaint with NATO asking for deletion of a Twitter post by the alliance’s Allied Land Command to mark Turkey’s 100th Victory Day on Aug. 30. Turkey observes that date each year to remember the effective end of its war of independence in 1922 when it defeated Greek armies.

Erdogan urged Athens to “remember Izmir,” the last city that Ankara liberated from Greek occupation at the end of the war. “If you go too far, the price will be heavy,” he said on Saturday.

In a defiant gesture, Turkish Defense Minister Hulusi Akar flew over the Aegean Sea in a fighter jet on Friday. Another source of friction is Turkish natural-gas exploration in waters also claimed by Greece and Cyprus.

(Updates with reaction from Greece in fourth paragraph.)