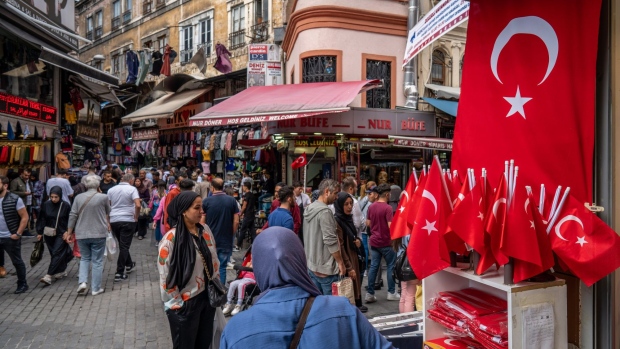 Turkish national flags for sale at a souvenir store in the Mahmutpasha Bazaar in the Fatih district of Istanbul, Turkey, on Tuesday, Sept. 20, 2022. Key Turkish banks are buying back shares after stocks reversed an unprecedented rally last week, providing relief for brokerages hit by the rout. Photographer: Erhan Demirtas/Bloomberg , Bloomberg

Turkey is seeking to tap the global bond market for the first time since March with a sukuk sale, amid rising global borrowing costs and cuts in its sovereign credit rating.

The country priced a $2.5 billion sale of three-year Islamic debt, known as sukuk, to yield 9.758%, down from the 10% initial price talk, according to a person familiar with the matter, who asked not to be identified because they’re not authorized to speak about it. Demand for the notes has been for more than $6.5 billion, more than twice the amount offered.

The last time Turkey turned to foreign investors with a sukuk sale was in February, when it borrowed $3 billion at a yield of 7.25%. It then borrowed $2 billion through a eurobond sale in March, bringing total borrowing from international markets to $5 billion this year, against a target of $11 billion.

“A three-year sovereign sukuk is a rarity. It was a good move to shorten the tenor though Turkey will still need to pay a premium over secondary levels given the economic mismanagement,” said Mohammad Ahsan, managing director of rates and fixed income at Mashreq Bank in Dubai. “Islamic accounts especially funds who have liquidity will be keen on buying this one.”

With President Recep Tayyip Erdogan’s encouragement, Turkey’s central bank cut its benchmark rate to 12% despite inflation above 80%, leading the currency to fall 28% against the dollar this year.