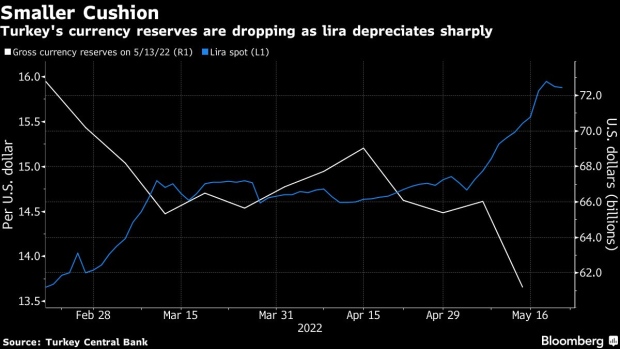 A Turkish flag by the Bosphorus strait during the evening sunset in Istanbul, Turkey, on Monday, Oct. 4, 2021. Turkey's consumer inflation accelerated in September, driven by a surge in the cost of energy. , Bloomberg

(Bloomberg) -- Turkey’s gross foreign-currency reserves fell the most this year, providing further evidence that an effort to support the lira is coming at an increasingly steep cost.

The stockpile shrank by $4.8 billion in the seven days ended May 13, according to central bank figures published on Friday. That brought total holdings, which exclude gold reserves, to a 10-month low of $61.2 billion.

The weekly decline was “shocking” and a sign that Turkey is “unsuccessfully leaning against the wind,” Cristian Maggio, the head of portfolio strategy at TD Securities in London, said in a note to clients.

Even with Turkish state banks occasionally intervening in foreign-exchange markets, the lira is this year’s worst performer in emerging markets against the dollar with a loss of over 16%. It’s falling against the backdrop of strong demand for the greenback by Turkish corporates, which are trying to insulate themselves from inflation fueled by past episodes of currency depreciation and a rally in global commodities prices.

State banks don’t comment on their currency interventions, but a former central-bank governor said in 2020 that government-owned lenders carry out transactions in line with regulatory limits and may continue to be active in the currency market.

Declines in reserves represent a key source of vulnerability for Turkey. During a period that spanned 2019 and 2020, President Recep Tayyip Erdogan said Turkey spent $165 billion trying to stabilize the lira, a policy that largely backfired and eventually forced the central bank to raise interest rates.