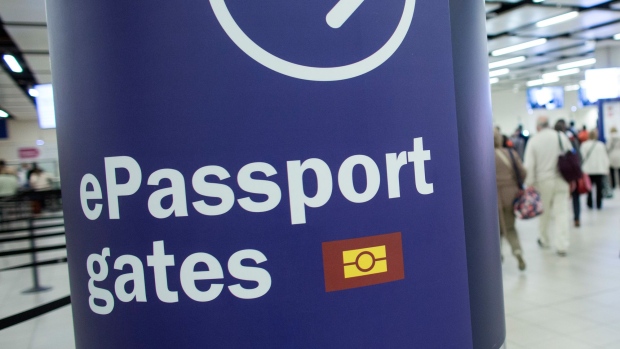 LONDON, ENGLAND - MAY 28: Passengers arriving at Gatwick Airport use the 'ePassport gates' at Passport Control on the UK Border on May 28, 2014 in London, England. Border Force is the law enforcement command within the Home Office responsible for the security of the UK border by enforcing immigration and customs controls on people and goods entering the UK. Border Force officers work at 140 sea and airports across the UK and overseas. (Photo by Oli Scarff/Getty Images) , Photographer: Oli Scarff/Getty Images Europe

Hubs in London Heathrow and Manchester reported issues before the Home Office said the problem was resolved.

“We’re aware of a systems failure impacting the e-gates, which are staffed & operated by Border Force,” Heathrow said in a tweet. “This issue is impacting a number of ports of entry.”

The issue was identified quickly and has been resolved quickly, a Home Office spokeswoman said by email. “We have been working hard to minimize disruption, and apologize to all passengers for the inconvenience caused,” it said.

London Gatwick opened more manual gates, and had no backups as of 2 p.m. local time, a spokesman said in an email. Manchester, whose parent company also owns London Stansted, was “working hard alongside UKBF to process passengers as efficiently as possible,” it said on Twitter.

Outages are common, and the problem would likely be related to central servers, said Lucy Moreton, a spokeswoman for the Immigration Services Union.