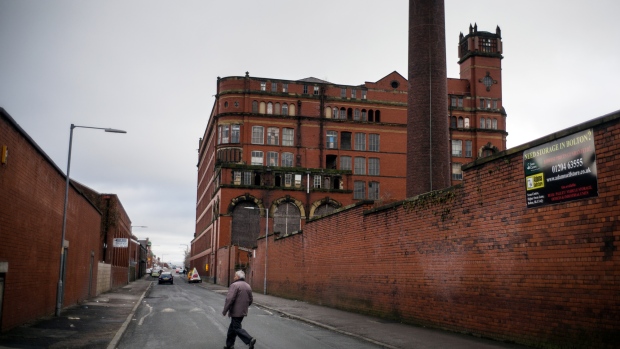 BOLTON, UNITED KINGDOM - FEBRUARY 09: A man walks past the former mighty Swan Lane Mill which is now partly derelict in Bolton on February 9, 2015 in Bolton, United Kingdom. As the United Kingdom prepares to vote in the May 7th general election many people are debating some of the many key issues that they face in their life, employment, the NHS, housing, benefits, education, immigration, 'the North South divide, austerity, EU membership and the environment. (Photo by Christopher Furlong/Getty Images) , Photographer: Christopher Furlong/Getty Images Europe

“The structural socio-economic exclusion of racial and ethnic minority communities in the United Kingdom is striking,” E. Tendayi Achiume, the UN’s Special Rapporteur on racism and human rights said in a report released on Friday.

“Reliable reports have shown that the austerity measures have been disproportionately detrimental to members of racial and ethnic minority communities, who are also the hardest hit by unemployment,” said Achiume, an assistant professor at UCLA School of Law.

Her report comes on the heels of a report by the UN’s rapporteur on extreme poverty Philip Alston, who criticized the Tories for what he said was the government’s “systematic immiseration of a significant part of the British population.” Britain risks following the U.S. in terms of declining life expectancy and stagnant wages for the less-educated portion of the population if the causes of inequality go unchecked, the U.K.’s own Institute for Fiscal Studies said last month.

Achiume backed up her case with statistics from the U.K.’s Equality and Human Rights Commission. By 2022, austerity measures will result in a 5% loss in income for black households, which is double the loss for white households, she wrote, citing data from the commission. Cash losses as a result of tax, welfare and wage reforms will average about 1,600 pounds ($2,020) on average for black households versus 950 pounds on average for white households, according to her report.

A spokeswoman at the Home Office didn’t have any immediate comment.

--With assistance from Stuart Biggs.

To contact the reporter on this story: Hugo Miller in Geneva at hugomiller@bloomberg.net

To contact the editors responsible for this story: Anthony Aarons at aaarons@bloomberg.net, Peter Chapman, Tim Ross