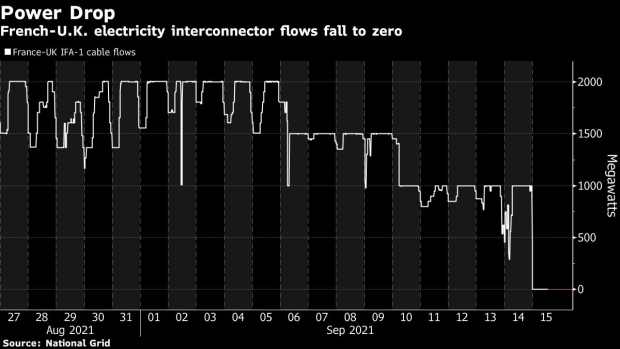 Winter blackouts are now a real possibility after a fire took out a key cable that ships electricity to the U.K. from France.

Electricity is now so scarce in Britain that any more grid mishaps or unexpected plant outages could leave millions without power. Even before the fire, National Grid Plc’s buffer of spare winter capacity was set to be the smallest for five years.

Beyond the immediate chaos a blackout would cause, a prolonged shutdown could have severe economic consequences. Just as Britain emerges from the pandemic, power outages would send energy prices even higher, compounding concerns about inflation and adding to the rising costs businesses are already shouldering for raw materials.

Britain imports and exports power along six huge cables, and two of them are connected to France. The electricity flows to the market with highest price. On average, about 7.5% of U.K.’s demand has been met by power from France’s 56 nuclear plants this year.

The cable is scheduled to be offline until the middle of next month, but given the substantial damage to the converter station, the shortage could impact prices for longer.

Goldman: Risk of Power Blackouts for Europe Industry This Winter

“It’s likely to be an issue for weeks or maybe months, not days,” said Glenn Rickson, head of power analysis at S&P Global Platts. “The outage is going to lift the potential for price volatility as long as its offline.”

Power prices have sailed through records this month as a period of calm weather reduced wind generation at the same time as nuclear outages were extended. The unprecedented rally in gas prices in the U.K. and Europe also pushed up the cost of using the fuel to make power.

National Grid sounded an early warning back in July that the U.K.’s ability to meet peak demand would be more strained this year. For now, the situation looks manageable.

“We’ll have a clearer view on any longer term impact of the IFA-1 outage in the coming days,” a spokesman said. “Currently we’re still forecasting that we’ll have sufficient margin to continue securely supplying electricity over winter.”

The interconnector outage doesn’t necessarily mean a blackout today but as the weather gets colder and demand picks up in October and November, the system will get even tighter, Andreas Gandolfo, analyst at BloombergNEF said.