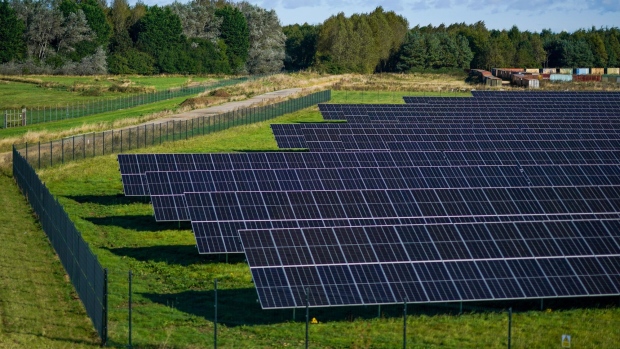 The British Army's first ever solar farm, part of Proect Prometheus, at the Defence School of Transport (DST) in Leconfield, U.K., on Wednesday, Sept. 29, 2021. The U.K.'s solar industry is calling on the government to triple installed capacity in the next eight years. Photographer: Ian Forsyth/Bloomberg , Bloomberg

(Bloomberg) -- The government-backed U.K. Infrastructure Bank will invest as much as 250 million pounds ($331 million) in a private fund that’s seeking to double the amount of subsidy-free solar power in Britain.

UKIB will provide financing to the initial seed assets of NextEnergy Capital Group’s infrastructure fund, which comprises two major subsidy-free solar farms in the U.K. The bank will match private investments to as much as half of the fund’s 500 million-pound target.

The bank has 22 billion pounds to finance low carbon investments, and this is its first deal with the private sector. UKIB was launched in June to replace the government-run Green Investment Bank, which was set up in 2012 and then sold five yeas later to Macquarie Group Ltd. for 2.3 billion pounds.

The new fund, called NextPower UK ESG, wants to have a generation capacity of about 1 gigawatt from 30 domestic solar farms. That’s enough to power 280,000 households. Solar power sources can be built subsidy-free after a sharp drop in the price of panels.

This “marks an important milestone in bringing together capital from both the private and public sector to fund the next the phase of evolution in the U.K. solar” sector, said Mike Bonte-Friedheim, chief executive officer and founding partner of NextEnergy Capital. “Unsubsidized new-build solar projects represent an attractive investment opportunity.”

NextPower UK ESG is a 10-year closed-ended fund managed by NextEnergy Capital, which has $3 billion of solar assets.