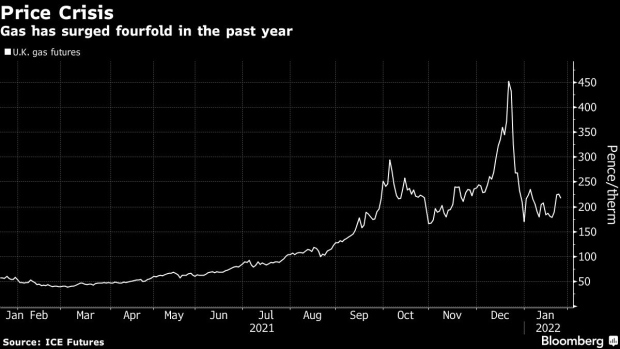 The funds will be used to advance the project to the next stage of financing negotiations over how much the government and private investors will pump into the facility. The construction of Sizewell C, which would provide power for six million homes, could cost about 20 billion pounds.

Britain says reaching net-zero emissions will be hard without nuclear energy, though plants are expensive and take years to build. In addition to the Hinkley Point C reactor being built, it has committed to finance at least one large-scale nuclear project by 2024. The recent energy crunch also highlighted the need to reduce dependence on expensive fossil fuels to generate electricity.

“We need to ensure Britain’s future energy supply is bolstered by reliable, affordable, low-carbon power” generated in the U.K., Business Secretary Kwasi Kwarteng said in a statement. The new funding “will further support the development of Sizewell C during this important phase of negotiations as we seek to maximize investor confidence in this nationally significant project.”

The 100 million pounds will be invested in exchange for an option for the government to use the land for something else if the project falls through. It will be returned as cash or equity if EDF makes a final investment decision. The configuration of the project’s investors hasn’t been decided yet.

The U.K. is overhauling the financing mechanism for nuclear plants. That may make investment more attractive for British pension funds and insurers, reduce the government’s dependence on Chinese money for infrastructure projects and dilute the construction risk shouldered by U.K. taxpayers and developers.

The new financing model is “expected to reduce Britain’s reliance on overseas developers for finance by substantially widening the pool of private investors,” the government said.

The U.K. has looked at ways to remove state-owned China General Nuclear Power Corp. from all future projects in the country, Bloomberg reported in July. EDF has said Sizewell C is viable without Chinese funding.

The 3.2 gigawatt reactor could receive a development consent order -- the final stage in the planning process -- in spring, with a final investment decision as soon as year-end.