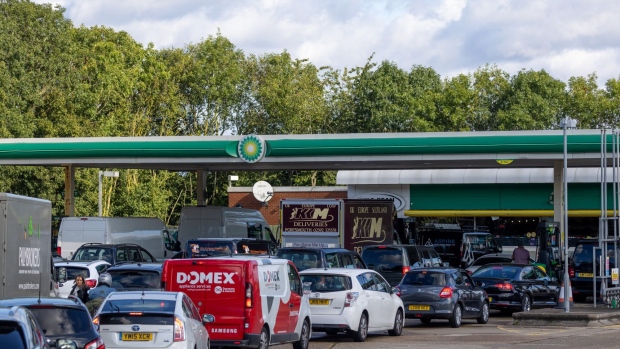 Cars queue up to use the fuel pumps at BP Plc petrol station near Guildford, U.K., on Monday, Sept. 27, 2021. The U.K. government took emergency measures late Sunday to try to ease acute fuel shortages across the country, as gasoline retailers shut pumps after days of panic buying. , Bloomberg

A “limited number” of army tanker drivers will be trained up in case they’re needed, the Department for Business, Energy and Industrial Strategy said late on Monday. Non-military holders of specialized licenses that allow them to drive hazardous substances will also have their permits extended.

It’s the latest emergency measure as the government attempts to get control of supply chain ructions that have drained petrol pumps, emptied some supermarket shelves and disrupted business.

At the weekend, Johnson announced 5,000 new visas for foreign truck drivers in a U-turn on his longstanding Brexit policy. The government then suspended competition rules to allow suppliers to share information and coordinate deliveries to forecourts.

“If required, the deployment of military personnel will provide the supply chain with additional capacity as a temporary measure to help ease pressures caused by spikes in localized demand for fuel,” Business Secretary Kwasi Kwarteng said in a statement.

Earlier on Tuesday, the Petrol Retailers Association said some of its members in England have all but run out of fuel. A group of companies including BP Plc, Shell U.K., and Esso say they expect demand to ease in the coming days and there’s no shortage of fuel at refineries and terminals.

While the government has sought to blame the crisis on the surge in demand caused by an economic rebound from the coronavirus pandemic, business groups and the opposition Labour Party say Johnson’s post-Brexit immigration policies are also to blame. That has cut the supply of labor from the European Union’s seamless market.

“This government is incompetent, in denial, careless and chaotic,” Rachel Reeves, Labour’s finance spokeswoman, said at the party’s conference in Brighton. “They are responsible for all this mess.”

Johnson’s government has already called in army examiners to help increase the availability of civilian truck-driving tests. Mobilizing the military further would be a political gamble for Johnson, who must balance the need to sort the supply chain issue quickly with the risk of causing more panic.

For now, the government is waiting to see if its measures will address the problem, a person familiar with the matter said earlier. The current expectation is that army drivers won’t be needed, the person said.