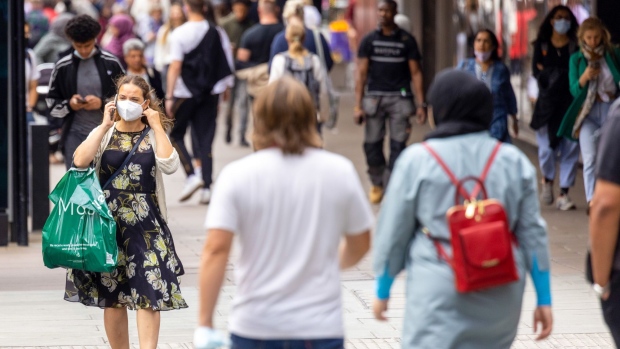 U.K. retail sales fell unexpectedly for a fourth month, the worst stretch of declines since at least 1996, suggesting a resurgence of coronavirus cases is taking a toll on confidence. The volume of goods sold in stores and online fell 0.9% in August from July, when sales plunged by 2.8%, the Office for National Statistics said Friday. Economists had expected an 0.5% gain. Sales excluding auto fuel dropped 1.2%, and the ONS revised away a small rise it had registered in June. Doubts are growing about the outlook for consumer spending, which powers the British economy. A resurgence of coronavirus cases has made people more cautious, and millions of households now face a sharp squeeze on living standards after a surge in inflation.

It was the first run of four consecutive declines since comparable records began in 1996. Spending in supermarkets and department stores dropped sharply along with most other categories tracked by the ONS, which said consumers steered spending toward eating out and entertainment events newly reopened after lockdowns. Figures this week showed consumer prices rose 3.2% in the year to August, the fastest pace in more than nine years. A further acceleration is almost inevitable, with natural gas and electricity bills set to increase sharply in the autumn and supply-chain disruptions leading to shortages of everyday goods. The government also is paring back support for low-waged workers by phasing out a temporary increase in universal credit benefits. It’s also eliminating a tax break on property purchases and planning to boost payroll taxes in April to pay for improved health care. Meanwhile, an autumn spike in unemployment looms with the ending of furlough payments for those out of work during the pandemic.  High frequency indicators point to a loss of consumer momentum in September, with visits to shops, spending on cards and eating out at restaurants all easing.