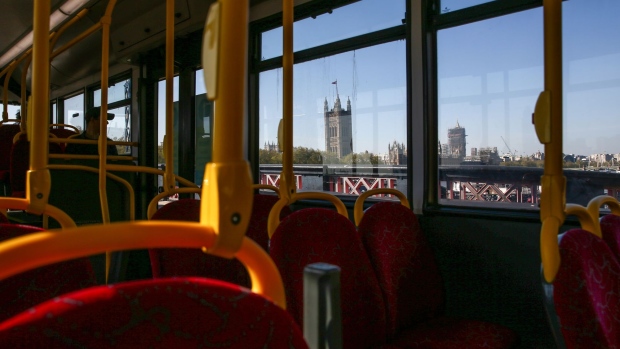 The Houses of Parliament stand in this view from inside a bus in London, U.K., on Wednesday, April 22, 2020. Boris Johnson's coronavirus strategy faces its first major political test since the U.K. was put on lockdown a month ago when members of Parliament question ministers in a sitting conducted via video-conference. , Bloomberg

The U.K. is looking at all options for tackling flare-ups of the coronavirus and will use regional data to target its response, Local Government Secretary Robert Jenrick said, following newspaper reports that a London-wide lockdown is being considered if cases spike in the capital.

While Jenrick said he wasn’t aware of a plan to seal off London, which the Sunday Times newspaper reported is being considered as a worst-case option by Prime Minister Boris Johnson’s inner circle of advisers, he said restrictions introduced in the northwest of England late Thursday show ministers will act where and when it’s necessary.

“We don’t want to do anything that’s a blanket approach across the country; our strategy is to manage this in a localized way with targeted action,” Jenrick told Times Radio. “We will restrict in certain areas -- and that’s difficult for people who live there -- but it provides greater freedom for the rest of the country, for businesses to reopen and people to get on with their daily lives.”

Ministers are seeking to balance the need to damp down flare-ups of the virus while rebooting the U.K. economy, which is facing its worst recession in 300 years. Jenrick denied newspaper reports of plans to close pubs and said restrictions on the movements of everyone over the age of 50 is “not something being actively considered.”

The reports came two days after Johnson postponed the planned easing of lockdown measures amid a surge in infections. The prime minister ditched proposals to reopen leisure facilities such as bowling alleys, and canceled trials aimed at getting sports fans back into stadiums.

Possible measures include locking down the capital if infection rates spike and tightening quarantine rules on those flying into the U.K., the Sunday Telegraph reported. There could be travel curbs in and out of the M25 highway encircling Greater London and a ban on overnight stays if there’s a surge in cases, according to the Sunday Times.

Less than a month ago, Johnson said the idea of a second nationwide lockdown was a tool similar to a “nuclear deterrent” -- a method of last resort. The U.K. has suffered the highest death toll in Europe and the government has been accused of waiting too long to impose the lockdown in March, raising the stakes for Johnson if he gets it wrong again.

“You’d expect the government to be considering the range of all the options,” Jenrick said. “We’re taking a very localized approach following the data and I’m working, for example, with each of the directors of public health in the London boroughs who are monitoring the rate of transmission in their own areas very closely.”

“There is no plan, as far as I’m aware, to do anything broader in London,” he added.