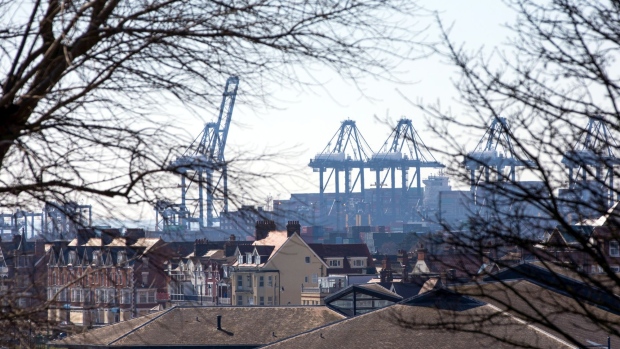 (Bloomberg) -- The U.K. is examining how it sources goods and supplies from around the world in a bid to be better prepared for future shocks like the coronavirus pandemic.

“What we’re looking at is what steps we can take to ensure we have diverse supply chains in place to avoid shortages,” Prime Minister Boris Johnson’s spokesman James Slack said on a call with reporters Friday. The pandemic “has demonstrated the importance of resilient supply chains to ensure the continued flow of essential items and keep global trade moving,” he said.

Britain’s response to the virus crisis has been hampered by an inability to acquire adequate stocks of items such as personal protective equipment and tests, due to fierce global demand and a lack of domestic production. Slack said the Department for International Trade is running a cross-government project on the matter, and is reporting to Foreign Secretary Dominic Raab on Johnson’s behalf.

Earlier, the Times of London newspaper reported that civil servants are drawing up plans to reduce the U.K.’s reliance on China for vital medical supplies, and has been asked to identify Britain’s key economic vulnerabilities to potentially hostile foreign governments.

Separately, Slack said the U.K. is closely monitoring the situation in Hong Kong, after China confirmed it would effectively bypass the city’s legislature to implement national security laws.

“The U.K. is committed to upholding Hong Kong’s autonomy and respecting the one country, two systems model,” Slack said. “We expect China to respect Hong Kong’s rights and freedoms.”