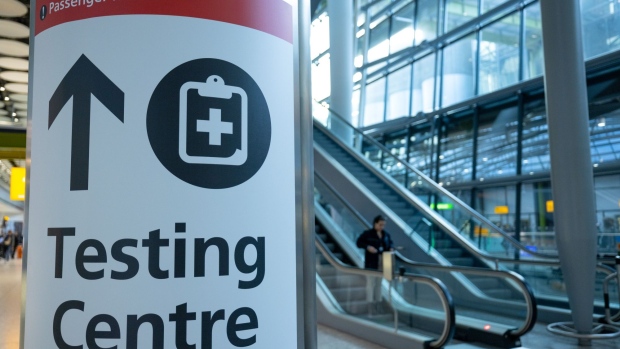 (Bloomberg) -- The U.K. government is taking a “balanced approach” on protecting the public from Covid-19 and won’t consider making vaccines mandatory, Deputy Prime Minister Dominic Raab said in an interview on Sky News.

The government last night announced that Covid tests would now be required for anyone entering the U.K. regardless of vaccine status as it looks to stem the spread of the omicron variant, which has now infected almost 200 people in the U.K. That comes after the government last week began requiring a PCR test within two days of returning to the country.

Raab said he understood that the new measures were a “heavy burden” on the travel industry, but were necessary to stop omicron, which is rapidly spreading across the globe.

When pressed on the high numbers of non-vaccinated people requiring hospitalization and contributing to delays in other health services, he said requiring vaccines as has been done in Austria was not the right approach.

“I don’t think it will be to say that everyone compulsorily has to have a vaccine,” he said.

Raab also said that that corporate Christmas parties can go ahead, but that employers should use “common sense discretion” to make sure attendees aren’t exposed to Covid.