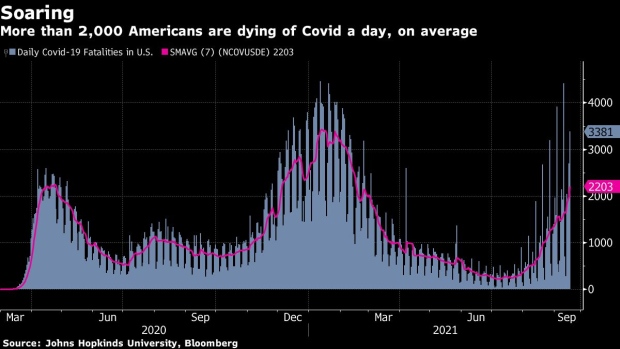 A healthcare worker administers a dose of the Pfizer-BioNTech Covid-19 vaccine during a vaccination event in Birmingham, Alabama, U.S., on Saturday, Aug. 28, 2021. Covid-19 hospitalization numbers and deaths continue to climb in Alabama as the state grapples with the most recent surge. Photographer: Andi Rice/Bloomberg , Bloomberg

The Covid-19 vaccine booster shot proposed by Pfizer Inc. and BioNTech SE should be given to older Americans and those at high risk, a panel of expert advisers to the U.S. Food and Drug Administration said. The move is a setback to a sweeping plan from the Biden administration to roll out booster shots to a broad population next week.

The Oregon Poison Center said that 25 people were treated for taking the drug ivermectin, most often used to kill parasites in livestock, against Covid-19 between Aug. 1 and Sept. 14. Five were hospitalized and two were admitted to intensive care, the center said in a statement on Friday.

“Covid-19 is a devastating disease and can be very frightening, but the public does not need to use -- nor should it use -- unproven and potentially dangerous drugs to fight it,” Robert Hendrickson, the center’s medical director, said in the statement.

Hospitals and poison centers around the U.S., and particularly in areas with low rates of vaccination, have reported an increase of cases of poisoning by ivermectin, which is approved for human beings in lower doses against some parasites. It is not an anti-viral, and the FDA has strongly recommended against it to treat the coronavirus.

A new algorithm can help identify fully vaccinated people who remain most at risk of hospitalization or death, according to a new paper in the British Medical Journal.

Researchers from the University of Oxford said the new QCovid risk prediction tool could potentially help doctors make informed decisions about who might be at risk of “serious“ outcomes despite vaccination and who might benefit from vaccine boosters or new treatments, such as monoclonal antibodies. The tool was developed by experts across the U.K. and is based on the data of 6.9 million people, of whom 5.2 million were fully vaccinated. The study did not distinguish between the types of vaccinations given.

A change in how the federal government distributes Covid-19 monoclonal antibody treatments appears to be reducing how much of the supply a group of largely Republican-led states receive, said Tommy Tuberville, a Republican senator from Alabama, one of the states in question.

Tuberville said the change was singling out those states and suggested supply was being held back to “strongarm” states into vaccine mandates.

Under the new policy, which HHS announced early this week, the government will allocate drugs known as monoclonal antibody therapies to states, instead of hospitals being able to directly order them from distributors. An HHS spokesperson said it was intended “to ensure our supply of these life-saving therapies remains available for all states and territories, not just some.”

The Covid-19 vaccine booster shot proposed by Pfizer Inc. and BioNTech SE should be given to older Americans and those at high risk, a panel of expert advisers to the U.S. Food and Drug Administration said, rejecting a request for broader distribution.

While the recommendation isn’t binding, it’s a blow to the Biden administration’s plan to deliver third doses to all American adults in the coming weeks to stave off the virus’s spread. The FDA will have to decide in the coming days whether to follow suit or overrule its trusted scientific advisers and proceed with a broader booster authorization.

Pfizer had originally proposed approving a booster shot for everyone 16 and older. But the advisers rejected that idea out of concern that the data to support such a broad application was thin and there could be risks, especially for younger people.

The push, which begins next month, will apply to U.S. offices and stores, the company told employees at a meeting Friday. Apple said it’s assessing its policies on a country-by-country basis, but Chief Executive Officer Tim Cookurged workers to get the vaccine. The iPhone maker has gradually tightened Covid policies, while still stopping short of requiring all employees to get the shots.

Pfizer Inc.’s vaccine declined in protection against hospitalization after four months, while Moderna Inc.’s remained stable, U.S. researchers found in an analysis of data from 21 US hospitals across 18 states.

Two doses of either vaccine provided more protection against hospitalization than the one-dose Johnson & Johnson vaccine, the study found, though Pfizer’s advantage over J&J narrowed over time, according to the study published Friday by the Centers for Disease Control and Prevention with collaborators across the country. All three vaccines provided substantial protection after four months -- Moderna’s was 92% effective against hospitalization by then, with Pfizer’s at 77% and J&J at 68%.

France has given the first dose of the vaccine against Covid-19 to 50 million people, President Emmanuel Macron said in a Twitter post on Friday. The country initially aimed to reach this milestone at the end of August.

Belgium’s regional governments agreed to divergent virus rules starting next month. An obligation to wear masks in bars, restaurants and stores will be abolished in Flanders, the wealthier Dutch-speaking region in the north, while the Brussels capital region and southern Wallonia will keep it mandatory. The Brussels government is also working on the use of a proof of vaccination, recovery or negative test to gain access to certain venues. In Belgium’s capital, only 51% of the population is fully vaccinated. Flanders has a vaccination rate of 78%, Wallonia is at 67%.

Those who’ve had two shots will be exempt from a pre-departure test before flying from nations that aren’t high risk, while screening after arrival will be downgraded to quicker and cheaper lateral-flow tests, the Department for Transport said Friday.

A so-called traffic-light system used to categorize countries will also be replaced, with a single “red list” for locations where infection rates are high and “simplified measures for the rest of the world,” Transport Secretary Grant Shapps said in a message on Twitter.

Researchers from Israel told a panel of U.S. vaccine experts weighing a potential Covid-19 booster dose from Pfizer Inc. and BioNTech SE that it’s unclear how long the benefit of such a shot would last.

A big part of the case for booster shots is data from Israel showing that, in the short term, a third dose of the vaccine dramatically lowered infections and severe illness in the short term in people over age 60 and older.

However, it isn’t yet clear whether the enhanced protection boosters could provide would be short-lived, or if the benefit would be lasting.

Three women visiting from Texas beat up an employee of the popular restaurant Carmine’s in New York City on Thursday night after she asked them for a vaccine card, a police spokeswoman said.

Earlier this week, city restaurants were required to enforce a rule that diners indoors must show proof of having received at least one dose of vaccine. At Carmine’s, the request escalated into a “verbal dispute,” then blows to the server that caused redness, bruising and a broken necklace, the spokeswoman said.

The women, from the Houston area, were charged with assault.

The average daily death toll from Covid-19 in the U.S. has increased almost ninefold in less than three months as the delta wave extends into autumn.

The seven-day average of fatalities reached 2,203 on Thursday, the highest level since February and up from 251 on July 1, according to data compiled by Johns Hopkins University and Bloomberg. More than 670,000 Americans have succumbed to the virus so far, a little more than half of them last year.

On the inoculation front, vaccinations have slipped recently and the U.S. has given out enough shots to cover about 60% of its population, according to the Bloomberg vaccine tracker. Confirmed infections are still averaging more than 150,000 a day. If current trends hold 2020’s death toll will be surpassed in 2021 -- a time when vaccines became widely available in the nation.

In a press release issued on Friday, WHO said its targets of vaccinating 40% of every country’s population by the end of 2021, as well as 70% by mid-2022, was achievable with “genuine commitment” from countries and manufacturers.

Additionally, the agency called on world leaders to ensure the world is better prepared for future pandemics, highlighting a need to break from the “cycle of ‘panic and neglect’ seen after previous health emergencies.”