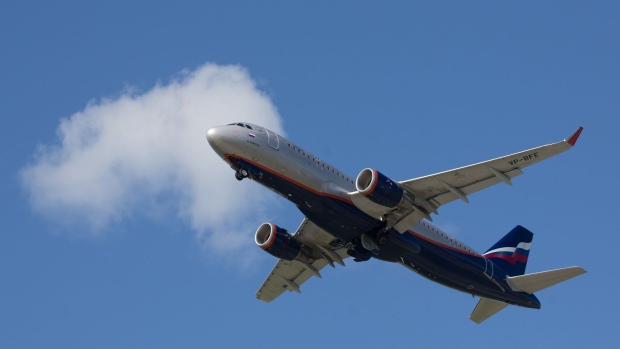 An Airbus A320-214 passenger jet, operated by Aeroflot-Russian Airlines PJSC, takes off from Sheremetyevo International Airport OAO in Moscow, Russia, on Friday, June 1, 2018. The 2018 FIFA World Cup is taking place in Russia for the first time and matches will take place in 11 cities including Kaliningrad in the west, Volgograd in the south and Yekaterinburg in the Urals. Photographer: Andrey Rudakov/Bloomberg , Bloomberg

(Bloomberg) -- The Centers for Disease Control and Prevention is weighing new measures that could allow for expanded travel after unveiling Covid-19 testing requirements for people flying into the U.S., said Martin Cetron, director of the agency’s division of global migration and quarantine.

Lifting travel restrictions on countries such as Brazil and European Union nations is part of ongoing discussions, Cetron said in an interview Wednesday. Whether to make allowances in the future for people who have been vaccinated is also under debate, he said.

“Protecting the global public’s health while minimizing the interference to travel and trade is essentially our goal,” he said. “This testing order is really a recognition and another step in that direction.”

The agency’s discussions are taking place as it works to implement the new rules, which take effect Jan. 26 -- after President-elect Joe Biden takes office. The European and Brazilian travel bans were enacted last year when the pandemic was just emerging, and they haven’t changed much since then, Cetron said. While the priority is promoting public health, the CDC is also mindful of the economic damage from broad travel bans, he said.

Following a presidential proclamation on March 11, the Department of Homeland Security barred entry by most non-U.S. citizens to the U.S. from 28 European nations, China and Iran. It was expanded to Brazil in May.

CDC Director Robert Redfield has urged the White House to end at least some of the bans, said a person familiar with the discussions who wasn’t permitted to discuss them. The CDC, DHS and White House didn’t immediately respond to requests for comment on the ban’s status.

Airlines, desperate to rekindle demand after an unprecedented collapse in air travel, have opposed the European restrictions and have been hoping that they would be eliminated in place of the new testing regime, said the person. Carriers have argued that even if more people begin arriving in the U.S. from countries where the virus is also common, performing tests will lower the overall risks.

Under the new rules, travelers will have to receive a test within three days before leaving for the U.S. and provide written documentation of a negative result. Airlines must confirm the information before allowing passengers to board, the CDC said Tuesday.

One potentially troublesome issue for airlines is what will happen on routes to Latin America and the Caribbean if countries there don’t have enough testing capacity to meet the CDC rules. U.S. airlines have enjoyed relatively robust traffic to and from Mexico, for example.

Key for the CDC is “finding the right level of individualized protections that keep people infected with the virus who don’t even know they’re infected or incubating the virus out of the transportation sector in order to keep everyone safe in the process,” Cetron said. “That’s part of the active discussions, the timing of which will be decided as we move forward with this implementation.”

The new rules don’t apply to domestic travel. The U.S. is in the midst of its largest-yet virus surge, with nearly 23 million confirmed cases of Covid-19 and more than 382,000 deaths. Cases of a variant of the coronavirus thought to be more transmissible that first raised alarms in the U.K. have also been identified in the U.S.

Asked about the lack of testing requirements for those flying domestically, Cetron noted that the CDC already recommends avoiding non-essential travel, whether domestic or international, during surges. The agency also has guidance on minimizing risk for those who do travel.

The new testing policy for air travelers entering the U.S. applies to U.S. citizens and people from other countries alike, with exceptions for young children, active duty military on orders and selected law enforcement.

People who have recovered from Covid-19 within the last three months can forgo a test but require documentation of their illness. Receipt of a Covid-19 vaccine isn’t currently part of the order but could factor into future policy changes, Cetron said.