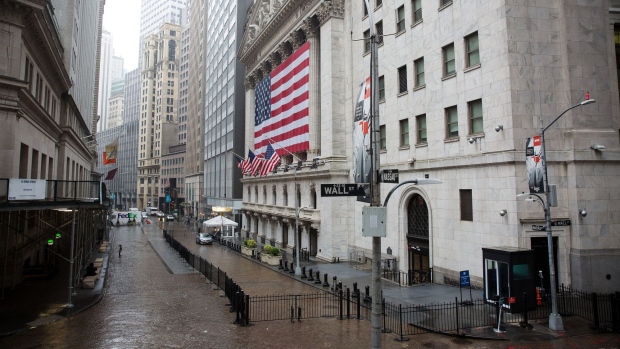 It began with a rush in mid-March, when a pair of U.S. corporate giants, Exxon Mobil Corp. and Verizon Communications Inc., braved the financial turmoil created by the coronavirus pandemic and sold a combined US$12 billion of bonds in a single day. Others quickly followed, emboldened by the unprecedented support provided by the Federal Reserve, and before long, deals were being rushed out at a clip never before seen in the history of U.S. bond markets.

On Thursday, that boom reached an astonishing milestone: US$1 trillion worth of investment-grade corporate debt sales had been brought to market in the first 149 days of the year. In 2019, a fairly typical year in the bond market, that figure wasn’t reached until November.

For the Fed, the borrowing binge is precisely the reaction it was looking for when it announced two months ago that it would prop up companies ravaged by the pandemic by providing a US$750-billion promise to buy corporate debt. The Fed has yet to purchase even one individual bond, having only started buying some corporate debt through exchange-traded funds two weeks ago. But from the moment policy-makers signalled their intentions, the floodgates opened, rebooting deal activity that had gone dormant earlier in the month and sparking a massive market rebound across nearly all asset classes.

For companies, the cash has been a crucial lifeline that could help many of them make it through the economic collapse that the the virus trigg Brookfield Property ered. Fittingly, it was a bond deal Thursday by the hotel chain Marriott International Inc., a company that has been devastated by the plunge in travel, that helped push the sales figure over the trillion-dollar mark. In a dramatic sign of just how high the stakes are — and how important it is for companies to maintain access to debt markets — there have been more corporate bankruptcies in May than in any other month since the Great Recession.

All of this new debt creates a new set of risks, though. U.S. companies were already highly levered coming into the crisis and by helping them heap more debt onto their balance sheets, the Fed runs the risk of deepening the pain if many of them fail to survive the virus. The central bank also will also have to decide — in coming months or, perhaps, years — when and how to remove the support without sinking corporate borrowers into distress.

“Leverage is going higher as cash flows are declining. Depending on how the recovery takes shape, this may weigh on credit quality and ratings,” said Steven Boothe, a high-grade debt portfolio manager at T. Rowe Price. “If it’s steep and long drawn out, that will be something to be mindful of.”

The bond frenzy may be nearing an end — at least for now. For the second-half of the year, most strategists expect a slowdown in corporate borrowing, especially if the economy rebounds quickly.

With their balance sheets amply padded, companies may just borrow US$200 billion in the last six months of the year, according to Bank of America Corp. strategists led by Hans Mikkelsen. The pace may also slow down heading into the U.S. presidential election, said Peter Aherne, head of North American investment-grade capital markets, syndicate, and capital strategy and structuring at Citigroup Inc. 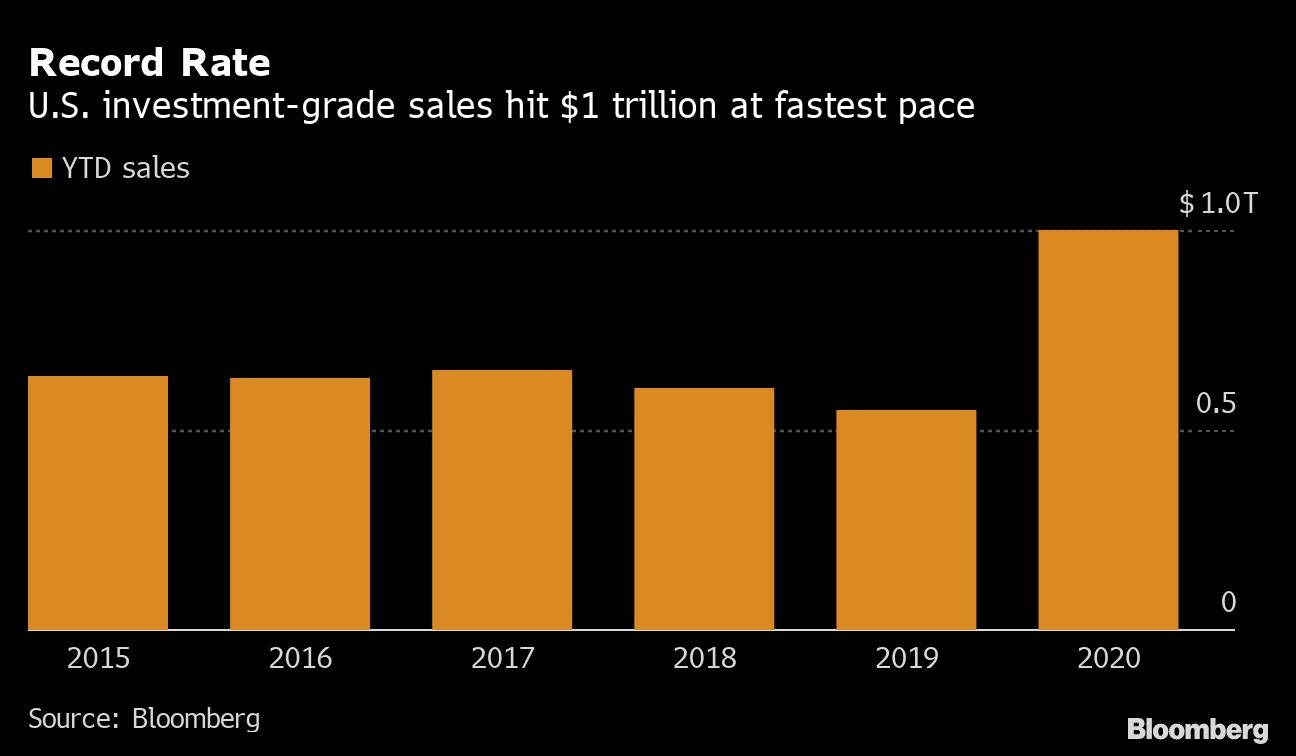 American companies have been borrowing steadily since the Fed first cut rates following the 2008 financial crisis, often to fund mega-mergers and acquisitions. Sales have topped US$1 trillion in each of the last eight years, but usually not until well into the second half of the year.

The previous quickest pace came in 2017, when sales flew past the US$1 trillion milestone in August, pushed by deal financing from the likes of AT&T Inc., British American Tobacco Plc and Amazon.com Inc. Supply reached US$1.4 trillion by year-end, setting an annual record.

This year, the borrowing came fast and furious and investors eagerly responded after the Fed’s announcement in late March. In the past two months, investment-grade spreads have compressed nearly 200 basis points, bringing all-in borrowing costs back down to pre-pandemic levels. Junk spreads have rallied 457 basis points, especially after expanded monetary support included some parts of that market, too.

What started out as only a mix of the highest-quality borrowers bringing new bond sales has since expanded to riskier companies like cruise lines and casinos. For the most part, demand has been robust, often allowing issuers to boost the size of their offerings and cut borrowing costs.

In the first six days of the program, the Fed said it had purchased US$1.8 billion of corporate debt ETFs, but hasn’t disclosed buying any individual securities yet. Two-thirds of the US$750 billion is for issuers to borrow directly from the Fed through a primary market facility, while the rest is for secondary purchases of individual securities and ETFs.

Many investors doubt it will ever need to go beyond the ETFs.

“As long as that strong demand remains in place, I don’t know that they need to do a large amount of buying,” said Stacey Starner Mcallister, head of investment-grade fixed-income research at Eaton Vance Corp. “Just the idea that Fed was going to support market liquidity greatly improved the functionality of the market.” 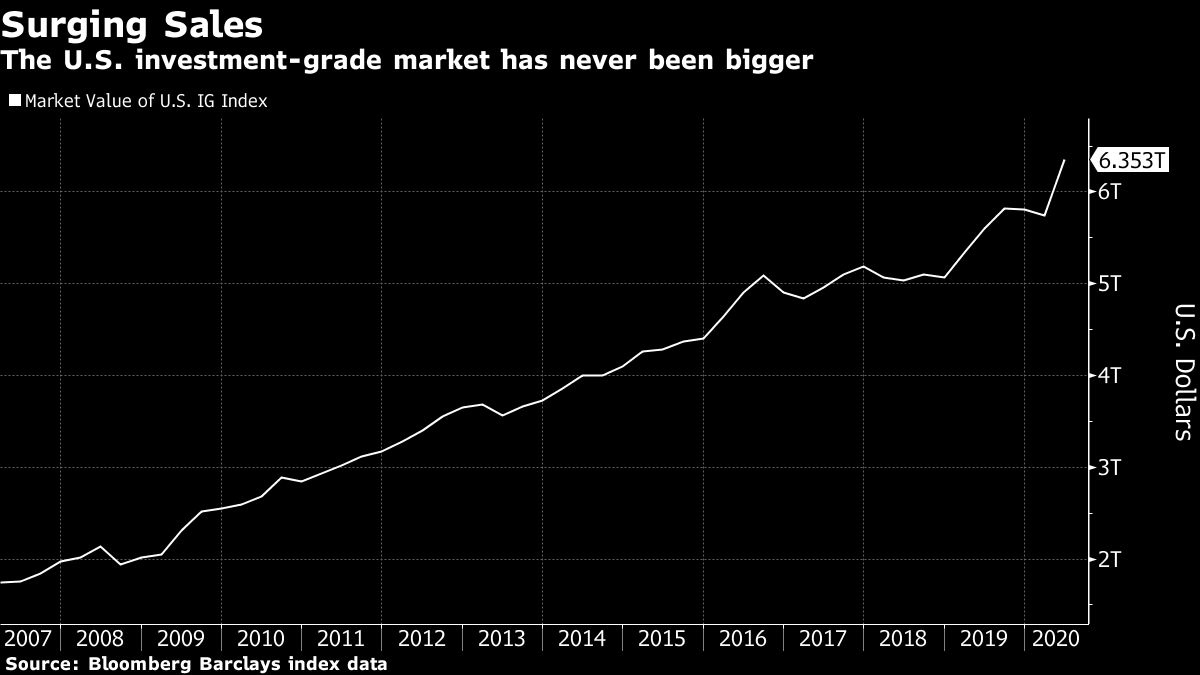 Unlike previous years when companies deployed debt for acquisitions, almost all of the proceeds have been used to boost their cash. Boeing Co. sold US$25 billion in the largest deal this year, followed by Oracle Corp.’s US$20 billion. T-Mobile US Inc.’s US$19-billion bond sale has been the only notably large offering for M&A, which helped finance its takeover of Sprint Corp.

Companies even increasingly double-dipped to get additional funding, often within weeks of their first offering. Nearly 40 non-financial companies — especially consumer ones like Coca-Cola Co. and McDonald’s Corp. — raised more than US$100 billion in debt through May 13, up from six that borrowed twice in the same period in 2019, Citigroup strategist Daniel Sorid said in a report.

While several companies like Discovery Inc. and General Electric Co. have borrowed to refinance outstanding debt, many like Boeing and General Motors Co. have taken on additional obligations in what’s also been a period of rising net debt issuance. That may contribute to an even higher number of borrowers getting cut to junk this year.

High-yield sales have also been robust since the Fed expanded its original program to include some of those securities in April. Junk issuers are on track to sell at least US$40 billion of bonds in May, which would be the busiest month in more than three years.