Stocks climbed after Federal Reserve Chair Jerome Powell reiterated his views that inflation pressures will be transitory even after a notable increase in recent months. The dollar fell.

In a testimony to the House Select Subcommittee Tuesday, Powell said he’s got "a level of confidence" that prices will eventually come down, while noting that it would be "very, very unlikely" to see the kind of 1970s-style inflation. He also said that a 5 per cent inflation environment wouldn’t be acceptable, and urged patience at evaluating data on prices.

"So inflation is larger than they expected," said Art Hogan, chief strategist at National Securities. "That part is true. But the part about that’s going to force their hand faster than we think is the part that he’s pushing back on. So I think markets have calmed down about that."

Most major groups in the S&P 500 advanced, with retailers and technology companies leading gains. GameStop Corp. climbed as the video-game retailer raised US$1.1 billion in share sales. Bitcoin fluctuated after earlier tumbling below US$30,000 for the first time since January. 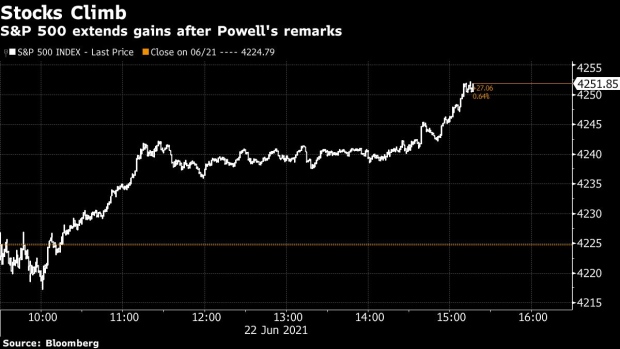 Earlier Tuesday, New York Fed President John Williams noted that a discussion about raising interest rates is still "way off in the future." Meantime, his Cleveland counterpart Loretta Mester said very low rates for a long period of time and unconventional policy tools such as asset purchases can lead to too much risk-taking and financial-stability issues.

--With assistance from Andreea Papuc, Namitha Jagadeesh and Claire Ballentine.